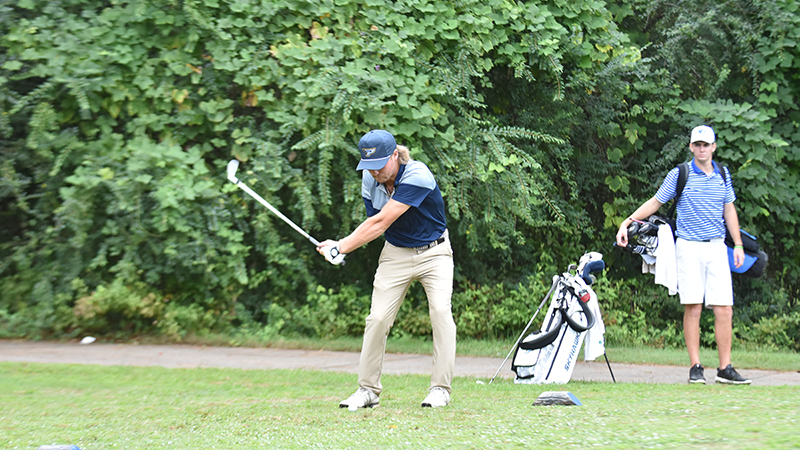 The Point men’s golf team won the Skyhawk Invitational at Point Golf Club over the weekend.

The team finished first out of nine teams and overcame a rough day one to win the tournament on their home course.

Trevor Poole was the leader for the Skyhawks as he finished fifth individually. He finished the tournament at even-par score to help Point win its first tournament of the year.

“It was far from our best performance,” Point head coach Maddux Lytle said. “With a young team, you had a few of those guys playing their first collegiate event. It’s pretty big to get the win, especially with the second round we were able to put together. It wasn’t perfect, but I was really proud of them.”

Lytle thinks his team’s strong start will help them through the rest of the season.

“I think it spikes our confidence,”  Lytle said. “I think it shows them that we have the ability to win even though it’s our home track. Everybody has to pull their weight. I think it shows them we have the ability to come back after a poor first round. The poor play in the first round was due to nerves but also excitement. You look forward to playing that event as a freshman. When you finally get there, it’s easy to get anxious and try to do too much.”

Lytle wanted his players to settle down after the first round and not force shots.

Point also had a B and C team play in the tournament, and Lytle was impressed by them.

“We had seven or eight guys that were no worse than five or six over par,” Lytle said. “Even the guys who didn’t play their best had one decent round. I told everybody I was super proud of them. It was their first event for a lot of them. We’re all just really excited.”

Although his team played well, Lytle feels like he may not have gotten the best assessment of his team from playing on their home course.

“I think there’s a lot more that goes into the mental side of that first event,” Lytle said. “I think when we get going midway through the season we’ll get a better look at what these guys are capable of. The greens were rolling faster than I’ve seen them. The rough was thick too. It wasn’t easy, and I think the score reflected that.”

The highest individual score in the whole tournament was two under par, which shows how difficult the course was.

The Skyhawks will play their next tournament at the Maryville Collegiate Invitational in Maryville, Tennessee.

Lytle doesn’t plan on changing their group of five golfers, but he will still hold qualifying rounds this week.

“Jan-Hendrick and Trevor Poole will play next week,” Lytle said. “The top five might change by one spot, but it might not change at all.”