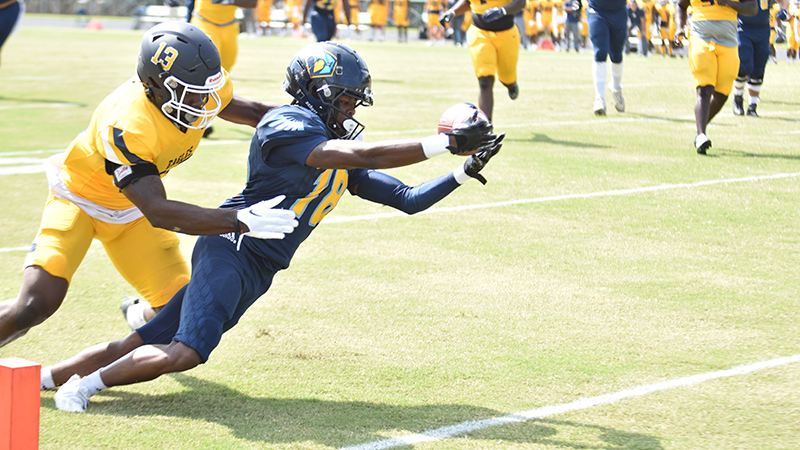 Point’s football team isn’t having the best start to the season, but their offense finally seemed to click in their 24-14 loss to twelfth-ranked Reinhardt on Saturday.

The Skyhawks opened the game with a stop on Reinhardt’s first drive.

Three plays later, and the Skyhawks found the end zone to go up 7-0 over the Eagles.

Point struggled on offense for the rest of the game, but that was due to starting quarterback Brenton White suffering a knee injury that kept him out of the game.

The 14 points scored by the Skyhawks was the most they’ve scored in a game all season. They also had a season low one turnover.

“We’re getting better,” Zeiders said. “We still have things we need to improve on. We’re starting to make the right decisions. We’re starting to understand. We’re doing the things we’ve been coached to do. We’re doing the things we’ve been asked to do. Being able to move the ball consistently is going to be important as we continue to move through the season. We’re still shooting ourselves in the foot too much. We had six illegal procedure penalties. It’s little stuff.”

Some of the little things include third down conversions. Point only converted three of their 13 third downs and none of their two fourth downs.

“Those little things mean a lot in the end,” Zeiders said. “We continue to talk about taking care of us. We didn’t do the best job of taking care of Point. We’re doing better, but we’re just not there yet.”

White finished 8-of-16 for 110 yards with a touchdown and an interception.

Junior Mitchell Gossett came in for White, and he finished 7-of-12 for 45 yards and a touchdown. Zeiders isn’t sure if White will play this weekend against Birmingham Southern, but he’s confident in Gossett’s ability to command the offense.

“White came in yesterday and said he’s playing Saturday,” Zeiders said. “We’ll see where that goes. If there is somebody that would want to play in this game, it’s him because he’s from Birmingham. I’m very confident in Mitch. He’s been with Brenton all along. He’s been in the coach’s ear all season. There’s no drop off in my opinion. They’re 1A and 1B. Mitch may have a slightly stronger arm, and Brenton might be the stronger runner of the two. Outside of that, there’s really no difference between the two of them.”

The Skyhawks also had a combined 54% completion percentage, which was their best all year.

Receiver Emery Bryant continues to be Point’s best offensive weapon, and he had four receptions for 79 yards, including a 44-yard catch on their opening drive.

“We decided we wanted to take a shot,” Zeiders said about the opening drive. “Any time you take a shot, it leads to touchdowns. That was one of the first explosive plays we’ve had in the last couple weeks. It helped that we had good field position to start. We talk about it, but situations will determine how we call the game. We can’t be too conservative, but we have to be responsible.”

One of the things Zeiders wants to see more of is his receivers giving it their all on every play.

“A lot of it is blocking on the perimeter,” Zeiders said. “A guy wants to take a play off because he doesn’t think he’s getting the ball. He doesn’t want to help out his teammates as much. Our receivers need to step up and make more plays in the passing game and the run game.”

Point’s run game did struggle against Reinhardt as they only averaged 2.6 yards per carry.

The Skyhawk offense also scored on two of their three red zone trips, which was their best red zone performance all year.

The Skyhawks will look to improve even further when they travel to Birmingham to take on Birmingham Southern on Saturday at 7 p.m. EST.