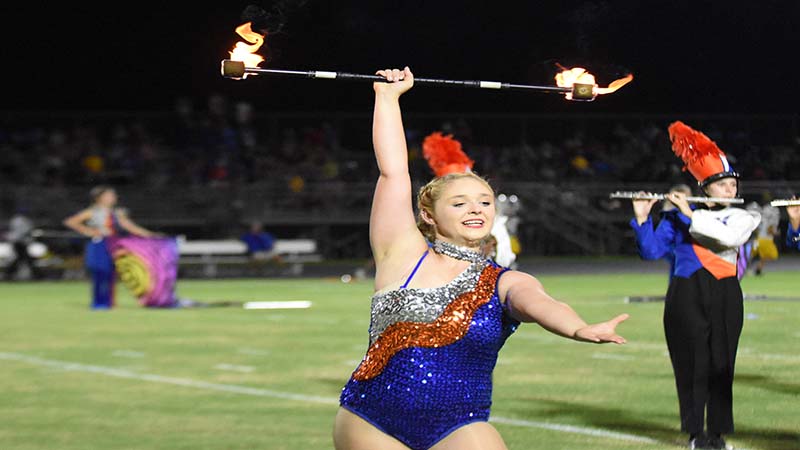 VALLEY — Valley High Band Director and current W.F. Burns Middle School Teacher of the Year Kitty DeLoach was the guest speaker at Wednesday’s noon-hour meeting of the Kiwanis Club of Valley. She told members of the club that she has had an amazing run in her nine years with the VHS band program.

A native of Elmore County, DeLoach is a graduate of Auburn University and was a member of the school’s marching band while there. At Auburn, she met then-Valley High Band Director Shannon Chandler who got her to help teach a summer band camp at VHS. He later helped persuade her to come back to Valley as his assistant.

Anyone who knows DeLoach loves her big smile, her enthusiasm for teaching and the way she imparts a love for music to today’s youth.

By the time students in the Valley system reach the sixth grade, they are behind students in other systems in terms of their musical background.

“Ninety-five percent of our first-year band students know little of music,” DeLoach said. “They can’t read music and have yet to learn to keep a beat. We have to teach them from the ground up. We start behind but make up for it due to the hard work our band students put into it.”

From that ground-level start, the sixth graders are far enough along with their music they can hold a Christmas concert that first year. The next year they can be in the W.F. Burns advanced band and the school’s marching band. The eighth-grade students are driven to Valley High every day to practice with the high school band.

DeLoach said she is ably assisted by Mark Meadows.

“Everybody loves our drumlines because of the excellent job he does,” she said.

Meadows directs the percussion section with DeLoach being in charge of everything else.

The Pride of the Valley band will be in three band competitions this fall.

“Our goal is to maintain our superior ratings,” DeLoach said.

Valley consistently has one of the more popular bands in these competitions because of the fun DeLoach and Meadows instill in these performances.

After band competition season, the Valley band students get ready for two major events in December, the annual Valleywide Christmas Parade and an annual Christmas concert.

In the winter and spring months that follow, DeLoach likes to teach her students older music like Sousa marches. Then comes preparation for a spring concert.

“We want our kids to learn and to enjoy band all year long,” DeLoach said. “I want them to learn real literature along the way.”

“He’s a retired band director, and we are fortunate to have him helping us,” DeLoach said.

It takes some serious dedication and commitment to put on an excellent halftime show.  It’s a matter of 96 kids learning the music and the marching routines in eight days.

There are some mistakes along the way.

“We clean that up in practice,” DeLoach said.

There’s a demerit system to keep everyone on the same page.

“We want to make sure everyone is on time, and they have all their marching stuff when they come to class,” DeLoach said. “I am not being mean; I just want everyone to be productive.”

One indicator of a successful program is the continued involvement of those who have gone through the program and graduated. The VHS band program has a very strong alumni group.

“Every week we have three or four alumni who come back to practice with us,” DeLoach said.

“Our band is a family and we stay family,” DeLoach said. “Being in the band provides a safe place for kids. They can be themselves and express themselves. They can forget the bad stuff that may have happened in their life at some point. We want our kids to know they are loved and can always come back. The band involves learning life skills, learning and being family. We try to teach this to our kids. We try to get them ready for college. It’s good for them to go to band camps on college campuses. My door is always open, and my kids can always talk to me.”

Every other year, the band students take a summer trip to a place like Disney World. “We have so many kids who have never been to places like Six Flags and the World of Coca-Cola in Atlanta,” DeLoach said. “We want them to have some truly memorable experiences in the Valley High band. This year we are planning a trip to Pigeon Forge, Tennessee.”

Fundraisers help meet not only the expenses of such trips but just to keep the band program at a high level.

A major attraction to the Valley High band this year is feature twirler Logan Wilson. It worked out that she’s the only majorette this year, and she’s really good.

“She is amazing,” DeLoach said. “It’s a lot harder than most people realize to be a majorette. Sadly, it’s becoming a dying art.”

When Valley has an out-of-t0wn game, the Band Boosters pay a percentage of the trip and the bus driver.

Band class has something unique going for it.

“It’s the one course taught at school where the left and right sides of the brain have to work at the same time,” DeLoach said.

Marching and playing are not as easy as some people think it is.

In addition to being a band director and classroom teacher, DeLoach has a busy home life. She and her husband, Jonathan DeLoach, are raising five children.