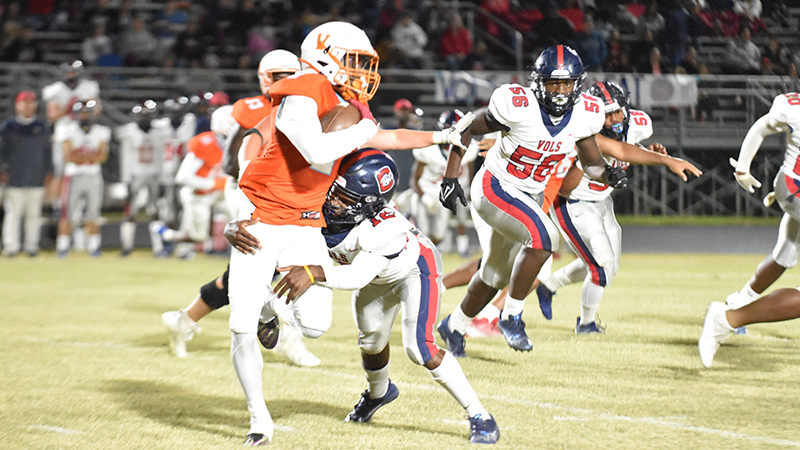 The Valley Rams struggled to get their offense going in their 12-6 loss to Clay-Central at Ram Stadium on Thursday night.

Although the Rams’ defense was able to hold the Vols on several drives, the offense couldn’t sustain any drives, which made it tougher on Valley’s defense.

The first half was an exchange of struggles for both offenses as neither could capitalize off their good field position.

Valley had a fumble on their first offensive drive after holding the Vols on downs. Clay-Central tried again on fourth down, but the Valley defense stood tall.

Things finally opened up for the Rams when receiver Chase Childs lined up in the wildcat and took the ball in himself to make it 6-0 Valley with only a minute and forty-five seconds left in the first half.

The Vols were able to drive down the field and set up a scoring chance, but once again Valley’s defense kept them out of the end zone with Ian Crim-Davis breaking up the pass.

In Valley’s one sustained drive in the first half, quarterback Cam Dooley used his legs to extend plays, including a key first down run to set Childs up for the score.

Dooley also wasn’t afraid of putting his shoulder down and making contact with defenders.

The second half was a disaster for Valley as the offense had to deal with some injuries, including a shoulder injury for Dooley.

Childs came in as the quarterback for one drive, but he threw an interception.

The Clay-Central run game wore down the Valley defense in the second half, and they scored two rushing touchdowns to beat the Rams 12-6.

Valley head coach Adam Hunter wants to see more out of his playmakers.

“We’ve got some people banged up,” Hunter said. “It hurt us offensively. We didn’t execute well on offense, and we have to do a better job if we’re going to win these games.”

“He’s ok, but he has a little AC joint sprain,” Hunter said.

Hunter wants to see the ball spread around a little more.

“We have to get the ball to our playmakers’ hands,” Hunter said. “We tried everything we could, and we have to deliver a better ball.”

Although the offense struggled, Hunter was pleased with his defense.

“They played great,” Hunter said. “They didn’t bend. They didn’t break. We knew we were going to have our hands full.”

Hunter wants his players to improve going forward into the final four games of the season.

The Rams will travel to Tallassee next weekend for another key region showdown.