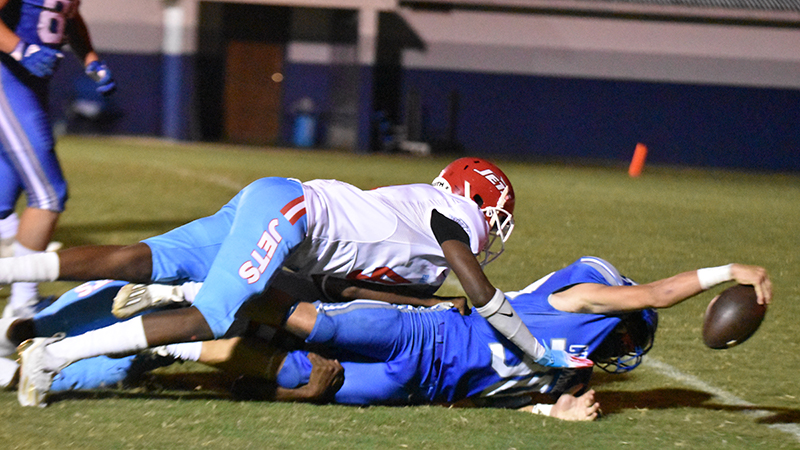 The pregame activities included a speech about the American flag while Allyson Noles rode on horseback around the field.

After the smoke cleared, the Rebels busted out of the gate with another dominant run performance.

Rebel running back Luke Tarver was the player of the game with three touchdowns on the ground and two fumble recoveries on defense. That was all in the first half.

The Rebels went into halftime with a 35-0 lead, and the Jets couldn’t get anything going offensively.

At halftime, the homecoming festivities started with the Chambers Academy cheerleaders and Rebelettes receiving roses.

The cheerleaders formed a tunnel at half field as the homecoming court walked through with their escorts.

Chambers Academy had homecoming representatives all the way from K3 to twelfth grade.

The second half of the game was played with a running clock, and the Rebels were able to put in their younger players.

Although none of the younger players scored, the Rebel defense was stout for the rest of the game.

Braxton Yerta scored the only touchdown of the second half to win 42-0.

Chambers Academy head coach Jason Allen feels like his team’s play in the trenches was key to their victory tonight.

“We’re getting better on the line of scrimmage every week,” Allen said.

“We’ve really embraced who we are, which is a smashmouth, stick it in your face team. We had a rough start, and we have a lot of things we need to improve on, but I like where we are right now.”

Allen was also incredibly pleased with not only Tarver’s performance in their game Friday but the season as a whole.

“He’s a bad man,” Allen said. “He plays with such energy and effort. He’s relentless, and I’m glad he’s on our side. He makes everybody around him better.”

The Rebels are now 3-2 after starting the season 0-2, and Allen is satisfied with his team’s progress.

“We’re resilient, and the kids kept their heads up,” Allen said.

The Rebels will begin a three game road trip against Bessemer next Friday.