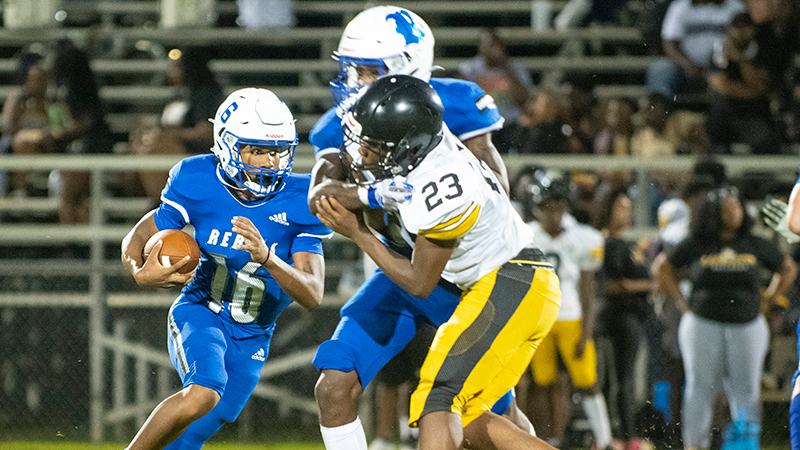 After all, the 41-0 win over LaFayette to open region play erased a few recent memories of a loss to Tallassee and seeing a game against rival Dadeville postponed.

“We had a bad taste in our mouth and were ready to get it out,” Johnson said. “I told the guys before the game to come out fast and physical. That is what we have been preaching.”

After throwing the ball around a little to open the season at Tallassee, the win against Lafayette saw Johnson and the Rebels returning to the roots of former coaches Duane Webster and Jackie O’Neal. And it’s something the Rebels will continue to do.

“We went back under center in the ‘I’ and ‘bone,” Johnson said. “That is our identity and what it’s going to be. The kids have been preached that.”

“I don’t know how many guys touched the football but we have a good rotation in the backfield,” Johnson said. “We have a good group of backs playing both sides of the ball. It was good to keep them fresh.”

The Rebel coach said the week off gave them a chance to get some players healthy, especially Collins who entered the Tallassee game with an ankle sprain.

“When he is healthy, he is explosive,” Johnson said.

The Rebels ended the night with 331 rushing yards on 39 attempts, mostly in the first half. Action was limited in the second half as Reeltown was already up 34-0 and the running clock meant far fewer plays.

Defensively, Woods led the Rebels with a fingertip interception in the first half.

“The interception was great coverage and what is good is that was a good receiver he was covering,” Johnson said.

Johnson said Woods is great at being in position to make the play.

Xavier Thomas also had an interception for the Rebels.

Johnson said there are a few mistakes the Rebels need to clean up before traveling to Goshen next week but he is happy to see his team accept returning to old school Reeltown football.

“We are flying to the football,” Johnson said. “We are under control reading our keys. We take care of the football. That is who we are.”