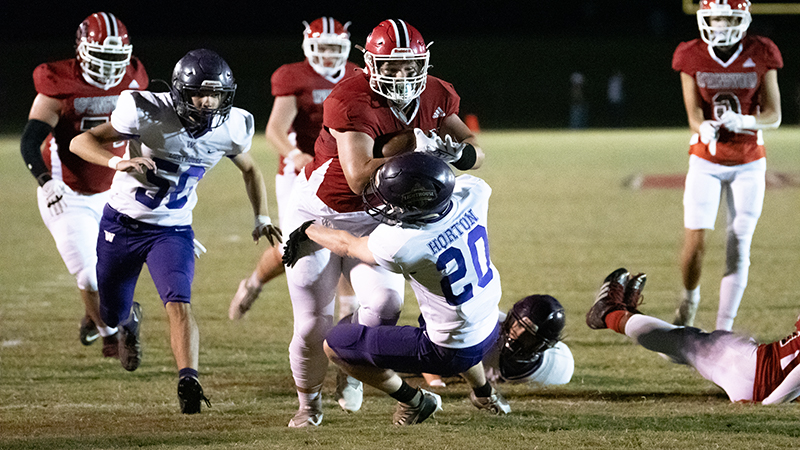 In a game between two of the top-rated eight-man teams in the state, a valiant comeback by the Springwood Wildcats came up just short Thursday night at Wildcat Stadium. The Lighthouse Home Warriors from Oneonta escaped with a 36-30 win when a pass to the end zone on the last play of the game fell incomplete.

“They didn’t give up tonight,” head coach Joey Burch said of his team. “A lot went against them, but they kept fighting. We were down by 16 points in the fourth quarter but had a chance to win it there at the end.”

The Wildcats trailed by 16 points, 30-14, early in the fourth period. It took them just one play to cut that lead in half. They put the ball in play on their 17-yard-line following the kickoff, and on the first play from scrimmage quarterback Ben Cooper hit running back Jonathan Johnson on a pass out of the backfield, and Johnson made an almost unbelievable run to the end zone for a score. He made a great move from the right side of the field back to the middle an broke two tackles to make it all the way to the north end zone. That made it 30-20. The margin was trimmed to eight points, 30-22, when Cooper passed to Cayden Cook on the conversion.

The Warriors went back ahead 36-22 on their next possession.

With just over five minutes left in the game, Springwood got another scoring drive going to make things interesting once again. A run by Johnson got them across midfield. and Cooper connected with Colt Pearson on a pass play to advance the ball to the Lighthouse 17. A couple of plays later he found Eli Johnson over the middle for a score. Jonathan Johnson ran it the two-point play to draw the Wildcats within six, 36-30, with 2:52 left in the game.

The Wildcats then opted for an onside kick. Francisco Lim’s rolling kick looked to be perfect, and Springwood covered the ball. With the Springwood coaches yelling “We got it! It’s our ball!” the officials huddled in a conference at midfield and decided to award the ball to the visitors, explaining that the Wildcats had touched it before it went 10 yards.

From there, the Lighthouse boys moved for one first down. A sack by Cayden Cook forced the Warriors into a fourth and long. On the next play, the Warriors threw a pass to the end zone that came close to being caught for a game-sealing score. Fortunately for Springwood, it didn’t happen.

The Wildcats took over on their 35 with just over a minute left in the game and a chance to win it with a touchdown and two-point conversion. A pass from Cooper to Jonathan Johnson and a Cooper run got it down to the Lighthouse 28 with the clock stopped showing 4.4 seconds, tine enough for a miracle finish.

On the final play, Cooper rolled left and lofted a long pass toward the left corner of the end zone. It was on the mark but batted away by a Warrior defender. The game ended in a 36-30 win for the visitors from Oneonta.

“I am proud to this team,” Burch said. “They have grown up a lot in just a few weeks. They get down, but they don’t give up. They keep fighting. Lighthouse is very solid. They are a good team.”

Two of Springwood’s starters missed the game with injuries and three more toughed it out and played.

The Wildcats will finish the regular season with three non-Region games, all on the road. Next Friday they will be at Windsor Academy. On the following Friday, they will be at New Creation and on Oct. 21 at North River Christian.

Springwood had over 500 yards of total offense in Thursday’s game. Ben Cooper had a terrific game, both on offense and defense. He completed 11 0f 18 passes for 184 yards and two TDs. On defense, he had nine solo tackles and three assists.

Cameron Sides has his usual good game on defense with 11 solo tackles, two assists, one sack and a forced fumble.