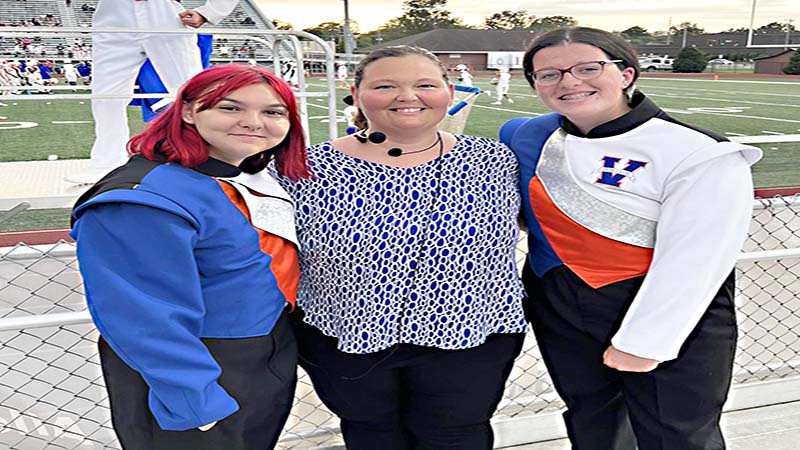 Two Valley High Marching band students performed alongside the Auburn University Marching Honor band last Saturday. Junior Jolee “Jai” Hood and Sophomore Meredith Crawley could not believe their luck when they found out they had been picked to participate.

Walking onto the field at AU’s Jordan-Hare Stadium, Hood and Crawley were jittery with nerves and excitement. They had practiced hard for this moment, and they were ready to represent Valley High during halftime.

“Being on the field in the middle of all those people feels like it’s not real,” Hood said.

Valley High Band Director Kitty DeLoach thought it would be a great opportunity for her students to get on a college campus, meet new people and have fun. It was also close to home for the Valley High kids, so it was realistic that they might find rides to AU on a Saturday.

In her ninth year at Valley High, DeLoach, an Auburn graduate, has encouraged her students to take part every year. She posted the announcement that AU was accepting applications, hoping some of her pupils would apply.

“I like that they’re getting out there on the college campus just to see what their future could look like,” DeLoach said. “Some kids might be afraid to go to college, and then it’s not so scary.”

When Crawley, a saxophonist, saw the posting, she was eager to apply. Her goal is to attend AU and be a member of their marching band. She hoped that participating in the AU Honor Band would give her a head start.

Hood also hoped the experience would help her get a scholarship. She chose the trombone in honor of her uncle, who passed away. She hopes to get into AU on a scholarship and become a psychiatrist.

DeLoach gave glowing recommendations to her alma mater for the girls, who were equally stunned by the news of their acceptance.

Crawley expressed astonishment that somebody from a small-town high school got picked by a big-name university like Auburn.

“I don’t know the words to describe it,” said Hood. “I was really shocked.”

It was no surprise to their band director though. The High School Marching band puts in the hours, practicing every day during school and two to three days a week after school. They also spend two weeks of the summer at band camp.

Getting accepted wasn’t the only hurdle the girls had to face though. The AU director provided Crawley and Hood with a song that they had to learn on their own.

“It was decently hard,” Crawley said. “It was fun to see that other people struggled to learn it too.”

However, Crawley and Hood are no strangers to hard work. They have learned life lessons from the Valley Marching Band, like being responsible, handling criticism and taking initiative. With all DeLoach’s guidance, they had to do the hard work themselves.

“If you want to do something, you have to strive to do it,” Crawley said. “It’s a lot of work, but it’s worth it.”

The highlight of the experience for Crawley was getting to meet other musicians from around Alabama, Georgia and even Tennessee. She also took the opportunity to see what she might expect from the college band that she plans to join one day.

“Adrenaline shoots through you,” Crawley said. “I wasn’t worried about messing up. I was just happy being there.”

The only thing they would have wished for is to make more lasting connections. Hood regretted not connecting with the other participants and the AU director. According to her, there were close to 600 high school students and over 300 college students in attendance.

Crawley wants to see more of her classmates and students from all around the county participating in the AU Marching Honor Band next year. As for Hood, the thrill of being on the field stood out to her.

“When I got onto the field, it made me realize that this is what I want to do,” Hood said.

Though exhausted by the end of the night, Crawley and Hood felt one step closer to achieving their academic and musical goals.

They were both thankful to DeLoach for teaching them important values that got them to the Jordan-Hare Stadium. However, DeLoach sent the honor back to her pupils.

“All I did was give a recommendation,” DeLoach said. “They did everything else…Success for us is if the kids are happy with what they’ve done.”

“I love doing that for beginners,” Crawley said. “It’s fun to see someone who’s struggling begin to do better because of you. It’s like, ‘Oh my gosh, I helped her do that!”

The high school marching band will perform in three competitions this year.

They will compete with Pinson Valley High on Sept. 24, Andalusia on High Oct. 1 and TR Miller High on Oct. 22.