Valley and LaFayette enjoy afternoon of volleyball together 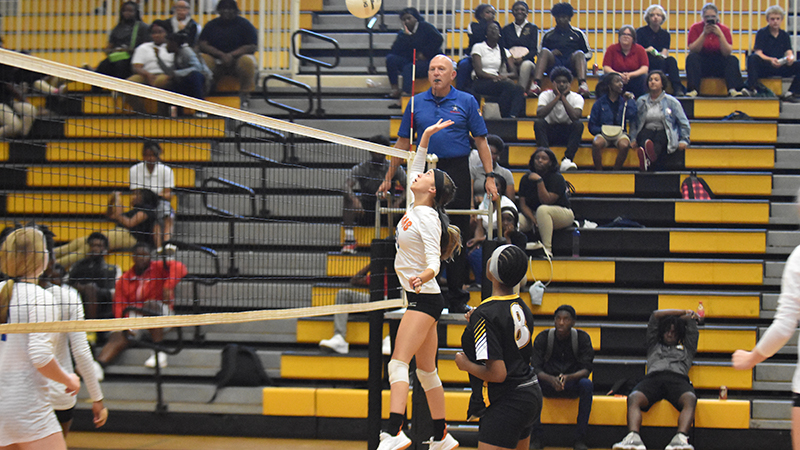 Instead of spending Thursday afternoon stuck in class, students at LaFayette High School were able to enjoy their afternoon watching Valley and LaFayette play volleyball at the LaFayette gymnasium.

The Lady Rams won 3-0, but the game was more of a chance to see how well the teams meshed together with consolidation looming.

The official match was over fairly quickly, so the two teams decided to mix and match players for one game.

The Bulldogs only have six players, so three of them went to the other team.

The crowd was the largest LaFayette volleyball had seen all season, and even the LaFayette band showed up to support the girls.

“Mr. Chambley got with coach Lewis and me,” Messer said.

“The match went pretty quick, and we had a little time to spare. We all got together, and it was Mr. Chambley’s idea for us to play together. We were able to get a feel for each other because that’s what we’re going to have next year. It was good for our girls to combine and play together.”

Both Valley and LaFayette are reaching the end of their seasons, and Messer is proud of her players despite a rough season.

Messer was pleased with her girls’ serving in their win over LaFayette.

“I was proud of them,” Messer said. “We kept the serve, which we haven’t done lately. It wasn’t because of the other team. It was because we served consistently. The girls just had fun today, and that’s what I like to see.”

LaFayette head coach Chase Lewis was pleased with his girls’ performance, even though they lost 3-0.

“I think we played pretty decently, considering this is the biggest crowd we’ve played in front of,” Lewis said.

“I think the first game was a little jittery because the student body was here. We played a good team. It’s easy to do an in-school game with Valley because we share the same boss.”

Lewis also liked being able to play the mixed match at the end.

Lewis is also looking forward to what the team is going to look like when the schools join together.

“We’re going to be a good 5A or 6A program,” Lewis said. “The girls look like they flow together. Everybody was in good spirits, and they worked together well. Both teams in the mixed match looked really good.”

LaFayette is also reaching the end of their season, and Lewis has been challenged with coaching a team with little depth and experience.

“It’s hard work,” Lewis said. “It’s been very enjoyable. We have a couple more area games. I’m really proud of my girls. Whether we win, lose or draw, they’re still in high spirits. We have to learn how to fight and get better. We have resilience.”

Lewis also liked the fact that his team got to play for a large home crowd.

“This was cool,” Lewis said. “This is what I was used to before I came to Chambers County. We had in-school games. It helps financially, especially with a low income sport like volleyball. It also gives the students a chance to see what volleyball games look like. We don’t charge that much to come to the in-school games. It was good to see the students engaged in the game.”

Valley will play Lanett on the road on Monday while LaFayette will have their senior night that same day against Horseshoe Bend.