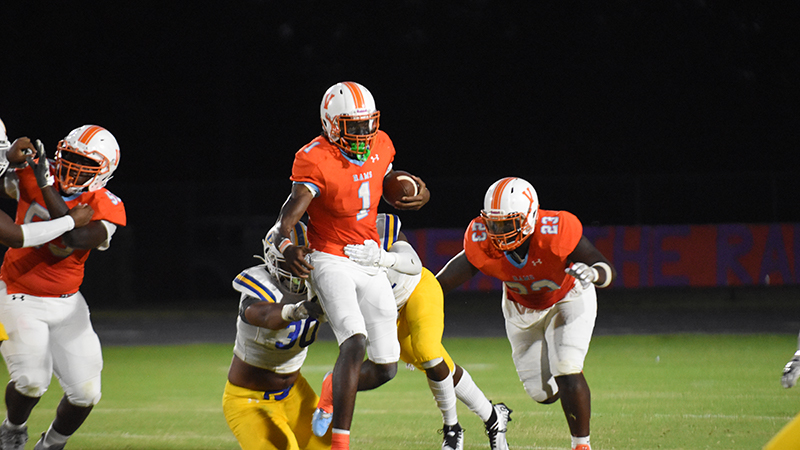 Valley struggled on both sides of the ball as the Hornets were able to control the pace of the game.

“Hats off to Beauregard. They hit us in the mouth,” Hunter said.

“We came out flat. We weren’t getting off the football on both sides of the football. We didn’t want it. We need to go back to the drawing board. Our kids have to wake up and play more physical.”

The first half was a blunder on both sides of the ball for the Rams.

They only ran six plays in the first quarter, and the Hornets were able to score 17 unanswered points to create a large lead in the first half.

Valley had one good drive in the second quarter where Cam Dooley found Chase Childs in the end zone to cut the lead to 17-7.

Beauregard quarterback AJ Wallace had two touchdown passes in the first half, and Christopher Gamble caught both of them.

“We threw the ball more than I thought we would have to throw it,” Hunter said.

“They did some things that hurt us, and we got behind the sticks. We had to throw the football, and we have to play a lot better.”

The Rams were able to gain some momentum back in the third quarter when Dooley ran the ball in to cut the lead to 24-14.

The momentum ended when a controversial unsportsmanlike conduct drove the Rams back and resulted in a 1st-and-37.

“Our coach was trying to get one of the players off the field, and the ref grabs him,” Hunter said.

“That can’t happen. We got a gut check. We’re fixing to figure out what we’re made of.”

Valley couldn’t score the rest of the second half.

The one bright spot offensively was Dooley’s two touchdowns, but the Rams couldn’t establish the run game.

The Rams will travel to face Sylacauga next Thursday.