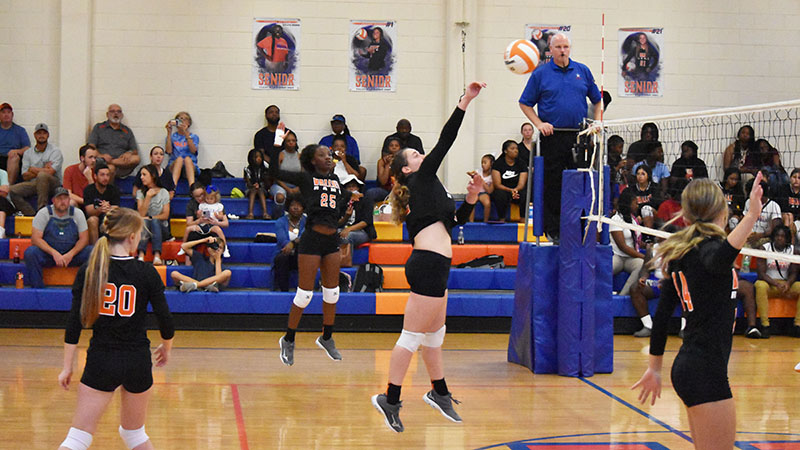 The Valley Lady Rams dominated the Notasulga Lady Devils on Thursday night at Valley. Both the junior varsity and varsity teams swept Notasulga.

The junior varsity team played first, and they played an incredibly close first game, but the Lady Rams won game one 25-20.

The second game didn’t get any easier, and it was a shootout until the Lady Devils made a crucial error to lose game two 26-24.

That wrapped up the match, as junior varsity plays a best-of-three match.

The varsity team got off to a slow start in the first game going down 9-5 against the Lady Devils.

Their serving and power at the net gave them some momentum, and they forced Notasulga to take a timeout with the Lady Rams up 10-9.

From then on, Valley’s serving proved to be too much for the Lady Devils, and Valley won game one 25-15.

Game two also started out slow, and Valley head coach Madison Messer took a timeout while her team was only down 2-0.

They stormed back to win game two 25-16 thanks to a long serving streak from Madison Chandler.

Game three was a little closer as the Lady Rams were having some communication issues, but their serving was still strong enough for them to win game three 25-18.

Valley won 3-0, and Messer was pleased with her team’s performance.

“They stuck together,” Messer said. “They played as a team tonight. It wasn’t our best game tonight, but we did enough to get the win. A win is a win.”

Messer was also pleased with the serving, which has been an issue for the Lady Rams this season.

“We’ve been struggling with our serves the past few matches,” Messer said.

“To see that, it was a big improvement. I’m really proud of them. They’ve really been working on that in practice.”

Messer was also satisfied with her team cohesion.

“I was impressed with how they came together,” Messer said.

“We have one of our players out that usually plays all the way around, so we had to adjust to that.”

Messer believes her team still needs to get better at communicating on the court.

“That’s one of our biggest issues,” Messer said.

Messer was also impressed by her junior varsity squad, especially since they have a lot of youth.

“I was really proud of them,” Messer said.

“They’ve been struggling, and they consist of a lot of seventh graders. They’re playing teams with girls that are older. I was impressed with them getting a win tonight. They were really anxious to get a win tonight.”

The Lady Rams are now 3-5, and they’ll have to travel to Handley on Monday. They’ll also try to reschedule their home game with the Tigers.