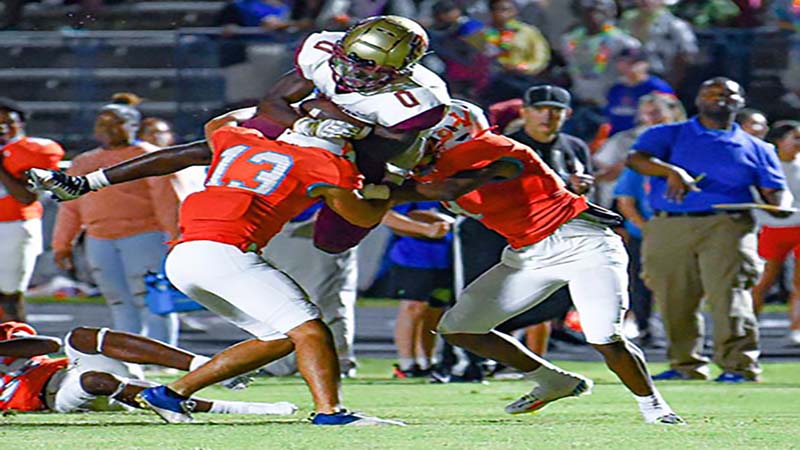 The pregame energy matched that of a playoff game inside Ram Stadium Friday night as the Valley Rams took the 6A Russell County Warriors to the wire, claiming a 27-23 victory.

Coming off a bye week, Valley head coach Adam Hunter said his team came out a little slow but was able to regroup and hold off a sound Russell County team.

“You know, we came out sloppy,” Hunter said after the game. “Defense played better. We gave up some big plays early, but they kind of settled down, and we played a good second half.”

Ian Crim-Davis got the night started with a 25-yard kickoff return to set the Rams up in Warrior territory, but that drive would stall, giving the Warriors the ball at their own 7-yard line.

In a half where chunk plays were the story, quarterback Cam Dooley set the Rams up inside the Warrior 20 with a 60-yard run. A Chase Child’s reception was stopped at the goal line, and an ensuing field goal sailed right.

With 11:49 left in the half, the Warriors struck first on a 39-yard Jose Castillo catch and run.

The Rams followed that score with an easy 66-yard touchdown pass from Cam to Denali Dooley, leveling the score at seven a piece.

Not to be denied, the Warriors answered back with a three-minute scoring drive of their own. However, Jay Harper took it to the house on the ensuing kickoff and tied the ballgame at 14.
The Warriors made a charge near the end of the half, but the Rams’ defense stood tall, holding the Warriors out of the end zone to get to the locker room tied 14-14 at the half.

While chunk plays ruled the first half, the second half belonged to the Valley defensive unit, which allowed 9 points, forced two takeaways, and scored in the second half.

As the orange and blue lights cascaded through the stadium to begin the fourth quarter, Rams junior defensive lineman Robert White recovered a Warriors fumble to set the Valley offense up in scoring position. That recovery eventually led to a Cam Dooley 4-yard touchdown plunge, giving Valley a 21-17 lead into the final five minutes of play.

With three minutes remaining, Brown made his presence felt again as he brought down running back Kelston Tarver for a five-yard loss, helping set up a 4th and 19 punting situation.

With the clock down under two minutes, the Valley offense could not sustain a drive and gave the Warriors the ball back on their 30-yard line and with 25 ticks left in the game, Harper hauled in a tipped pass for an interception and took it into the end zone to seal the victory.

Hunter looks to clean a few things and get more physical when the Rams take on Central Clay County next week at home.