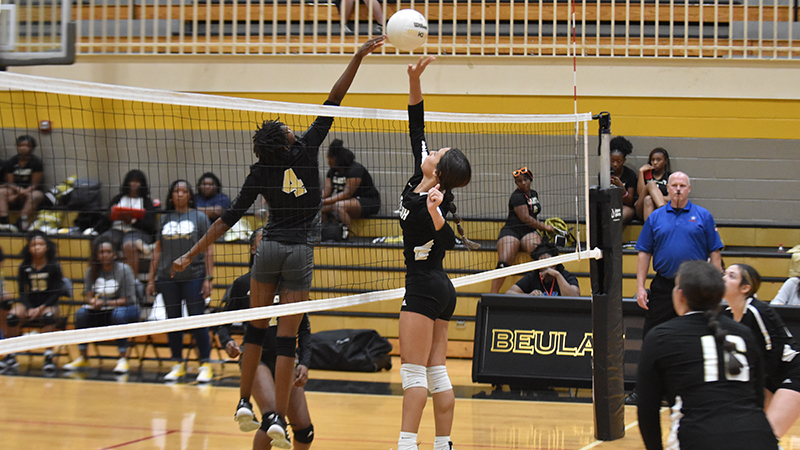 The Beulah Bobcats finished their regular season with a 3-1 victory over the Lanett Panthers at home on Thursday night.

The Bobcats ended the season with four straight wins, all in a span of four days.

The Bobcats won the first game 25-15, and Beulah’s Ashlynne Sluder had the winning kill.

The Panthers made the second game closer, but the Bobcats still won 25-22 thanks to Amya Dunn’s game winning block.

Lanett’s serving and blocking picked up as they won the third game 25-15, and Makiah White ended her impressive serving streak with a game winning ace.

The fourth game was a back-and-forth battle for both teams, but Beulah’s Sluder had the game winning kill to finish the fourth game 25-23.

Beulah head coach Allison Aikens  was really pleased with how her girls ended their season.

“I’m excited because I feel like we’re peaking at the right time,” Aikens said.

“We go into area play next week.”
Aikens was proud of how her girls fought on Thursday night.

“I was proud of their determination,” Aikens said.

“We played better at the net. We had a lot of blocks and a lot of digs that we haven’t been getting. With the exception of the first game we lost, our serves were pretty consistent. I’m really proud for our seniors to get their final win at home.”

Beulah only played two games at home this year, and both of them were wins.

Although Lanett was blocking really well, Aikens decided to stay aggressive at the net.

“Lanett has improved so much,” Aikens said.

“I wanted to be able to beat them because they beat us at their place. I wanted the girls at the net to do their job. We have to learn how to defend blocks.”

As the Bobcats enter area play, Aikens wants their communication to improve.

“We need to not be in each others’ way,” Aikens said.

“That happened a few times tonight. We need to clean it up so that we’re more consistent.”

Aikens was also happy with the support her team had from the students.

“It’s awesome to have them going in,” Aikens said.

“It pumps the girls up. We haven’t really had that this season, and it was nice to hear them cheering from the stands.”

Despite the loss for Lanett, head coach Krisse Story knows they’ll be fine, especially since they were missing a couple key pieces.

“We started out slow in that first set. It put us in a hole, but we bounced back in the last two sets. The girls adjusted well to playing positions they’re not used to playing. I’m proud of their effort.”

Story continues to be impressed with her team’s fight.

“I was most impressed with the fact that they don’t give up,” Story said.

“I was really impressed with our blocking tonight. We served much better too. We either serve it out of bounds or we serve it short because we’re trying to adjust. They serve really well, but they’re strong girls. They lift weights. It’s hard to serve the ball in play a lot of times.”

For Story, she was also happy that they were able to play in a gym where the ceiling is high enough to not affect the ball.

“We didn’t have to worry about tracking the ball,” Story said.

“We’re going to work on cohesiveness in the next week. We need to work on serving too, and our defense was a little bit sloppy.”

Both teams will start their area tournaments next week.