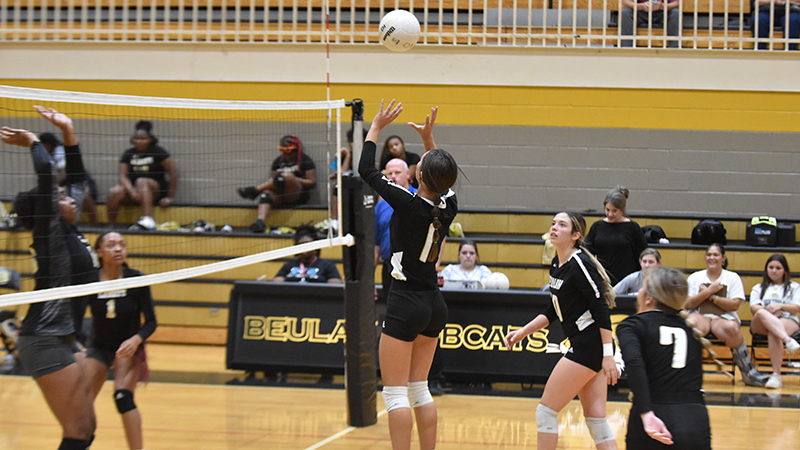 The Beulah varsity volleyball team ended its season with a 3-0 loss to Alabama Christian in the area tournament on Wednesday.

The tournament was hosted by Prattville Christian, who ended up winning the area tournament.

Since Beulah didn’t make the area finals, their season is now over.

It’s been a challenging season for the Bobcats as they were able to play only two games at home due to their gym being renovated.

The start of the season was rough for the Bobcats as they only had wins over Valley and Horseshoe Bend after the season’s first month.

It wasn’t until late in the season that the Bobcats found their footing.

They ended the season with big wins over Valley, Lanett and Booker T. Washington.

For head coach Allison Aikens, it’s been a year full of ups and downs.

“Last night finished up our season for the year,” Aikens said.

“We have a really good group of young women playing for us. It was really challenging playing in the old gym pretty much the entire year. We made do with what he had. The girls did well to overcome that. We didn’t win as many games as I would like to, but our girls did really well. I’m really proud of them.”

Aikens knew the game against Alabama Christian would be a tough matchup.

“We played them twice this year,” Aikens said.

“We had our best game against them last night. I can’t complain. Our girls played with a lot of heart. They gave it all they got. I’m pleased with the way they played.”

Aikens wants her girls to continue to get faster and stronger before next season.

“We need to work on our movement,” Aikens said.

“We need to have better coverage and work on our agility and quickness. The girls have worked a lot in the weight room, and you can just tell the difference. I want to continue to improve on that. I would also like to be more consistent hitting at the net. I think we’re on our way.”

Beulah will lose four seniors, but Aikens was able to get an early look at her team with the junior varsity squad.

“We have a good idea of who we have next year,” Aikens said.

“I’m excited to see what we have in the younger group with some of the seventh graders coming up. We’re losing a bit of height, but we’ll still have several of our taller players coming back, which will be a big help at the net. We’ll have tryouts in the spring for next year. I’m looking forward to building a team for next year.”

Aikens believes her seniors were the key pieces of the team this past season.

“Our group of seniors were leaders on and off the court,” Aikens said.

“They really worked to get better. They always wanted to improve. We also had players step up like Elizabeth Hancock, Ashlynne Sluder and Maddy Snedigar. I feel like I could name all of them. They all contributed in a way.”

Aikens will also be glad to play a normal amount of home games next season.

Aikens knows their season was challenging due to the schedule.

“We had to play Prattville Christian twice,” Aikens said. “We had great teams in our area. We may not have always won the match, but we won several games. I’m really pleased with the season and how the girls handled themselves. I learned that you have to push through adversity and learn and adapt with what we have. If we learn together as a team, we know it will be great in the end.”

The Bobcats won’t have any more volleyball activities until they hold tryouts in the spring.