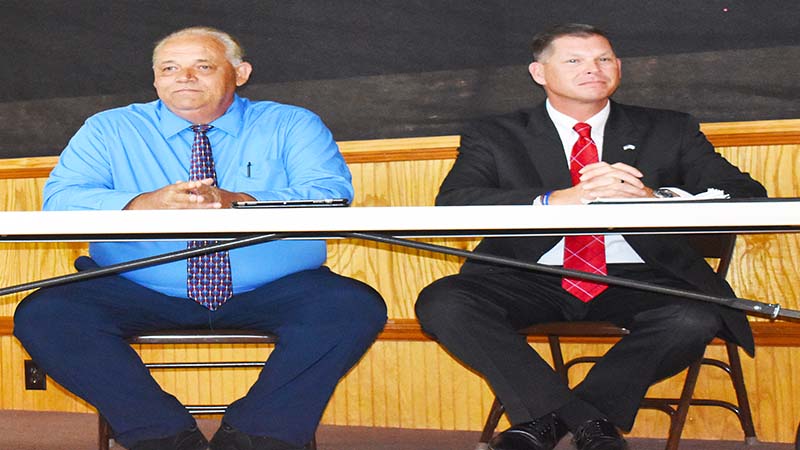 For the first time in 28 years, voters in Chambers County will be electing a new sheriff during the general election on November 8. This comes after the announcement from current sheriff Sid Lockhart that he would be officially retiring at the end of his current term. The two candidates for the upcoming election are Republican nominee Jeff Nelson and Democratic nominee Jeff Blackstone.

With over 25 years in law enforcement experience across multiple different areas and departments, Nelson was the clear winner of the Republican primary this past May, receiving 66% of the vote and beating current Chambers County Chief Deputy Richard Carter. Nelson noted that he believed this was due to his extensive background and experience.

“I think when people hear my story, hear about my background and training, they realize that I was very qualified to do the job,” Nelson said. “I also think that citizens of the county wanted change. While the past two sheriffs have done an excellent job, they ran the department the same way and did a lot of the same activities. I think that the citizens want a little bit more.

Nelson began his career with Roanoke Police Department as a part time dispatcher in 1991 and became a patrolman with the city in 1992. In 1997, he was hired by the Alabama Department of Public Safety as a State Trooper and was assigned to Chambers County. While working as a Trooper, Nelson was assigned to the Special Operations Unit, Field Training Officer Unit, Motorcycle Unit and Traffic Homicide Unit. In 2007, Nelson was recruited and transferred to the Alabama Bureau of Investigations (ABI). However, after receiving news that some of his family members were sick, Nelson requested to return to highway patrol to be closer to home.

If elected, Nelson noted that his biggest goal would be to increase the number of deputies on patrol and ensure that all of the deputies were trained to the highest regard.

“I am a firm believer that a sheriff is only as good as the deputies that work under him,” Nelson said. “If elected, I want to make sure that we can have more than two deputies on patrol at one time and that our deputies have the best training and education to best serve the county. To me, it is a no-brainer: better training, better men and women on the roads.”

Nelson also said that he would put a large emphasis on getting better equipment for the department, including new vehicles.

“It is going to be really important that we work on getting better equipment for the department,” Nelson said. “Right now, our deputies are driving pretty old vehicles, and it is going to be more expensive to constantly maintain them.”

Across the aisle, Democratic nominee Jeff Blackstone also has extensive experience, working for 20 years in Chambers County law enforcement. Blackstone noted that he believed that his experience within the county gives him an advantage over his Republican opponent.

“I know the county, I know how it works and I know the people here,” Blackstone said. “I think my time here will be very important if I am elected to be sheriff.”

“I really want to put a bigger emphasis on checking on our senior citizens because I think that sometimes they can be forgotten about,” Blackstone said. “We have deputies across the county day and night, so I think it would not be difficult to start a list and procedure where they could do check-ins on our seniors.”

Blackstone also spoke on the creation of an aviation unit. Currently, the county has two functional helicopters, however they are too expensive to operate and maintain. It is Blackstone’s goal to create a joint task force between Chamber’s County and surrounding municipalities to fund the helicopters for use when needed. Nelson had previously spoken on this topic as well, saying that he did not believe that such a program would be the most necessary expense and that the state can provide helicopter support when needed. However, Blackstone pointed out his concern with relying on the state.

“Right now, it can take over 30 minutes for the state to respond with helicopter support if it is needed,” Blackstone said. “That is critical time, especially when there is a big emergency. By having our own aviation unit and task for, we would be able to quickly respond to emergency situations faster than the state would be able to.”