CFCP volunteer receives key to the City of Lanett 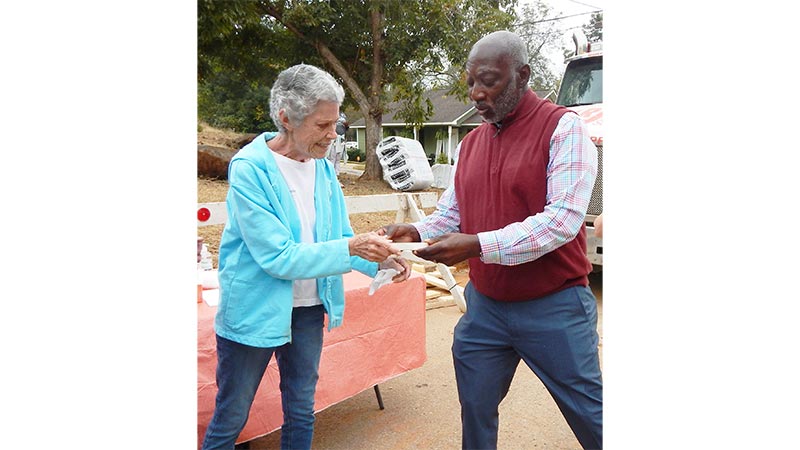 Volunteer Annette Metz was honored for her dedication to the Chattahoochee Fuller Center by being presented the keys to the city by Lanett Mayor Jamie Heard. Metz, who is battling cancer, asked to be a part of the current build.

“Everybody at the site was just so loving and so caring,” Metz said. “It was quite a trip.”

After being diagnosed with breast cancer in 2007, Metz moved from Austin, Texas, to Georgia to be close to her family. Two years later, she began her volunteer construction work at the Fulton Habitat for Humanity with then-construction manager Chuck Ingraham.

By 2013, Ingraham had left Habitat for Humanity and become CEO of a covenant partnership with the Fuller Center in Lanier. Metz joined him at the new organization the same year.

One of about 90 covenant partners, the Lanier Fuller Center partner focuses on Greater Blessings projects, which are repairing homes of qualified homeowners.

“We’re on our 74th Greater Blessing,” Metz said. “There’s a lot of people that need help, and it’s just so rewarding. And they are so grateful that it’s a total blessing for everybody.”

However, many covenant partners began legacy builds in 2009 in honor of the late Millard Fuller, founder of the Fuller Center. Ingraham and Metz have volunteered on build after build each year.

Sometimes, she and Ingraham visited five houses in one week, Metz remembered. The two have worked as home leaders on three Chattahoochee Fuller Center legacy builds.

“She’s one of the most organized ladies,” said Chattahoochee Fuller Center Director Kim Roberts. “She will keep your tool trailer and your mobile mini so organized. You could find anything in there. She was the best.”

In 2019, they worked with Roberts on the builds in Opelika, after the tornado hit. Metz was astonished by the difference the legacy builds made in the area.

“You see nothing when you walk into the place, and then a week later you have families moving into their homes,” Metz said.

In February of this year, Metz was diagnosed with cancer. It was by her request that she visited the build site in Lanett, on Wednesday. Metz became emotional thinking about her most recent build trip.

“I do have cancer, and it’s not curable,” Metz said. “I just wanted to see everybody again.”

However, when Roberts found out that Metz was coming, she devised a plan. She wanted to show Metz her gratitude for all of her hard work over the years.

“Volunteers are precious when they give up their time to come and help others,” Roberts said. “And to know that her days are numbered, I just thought she deserved it.”

Roberts called Heard and asked him to come to the site and meet Metz and welcome her to town. However, Heard had even greater plans. Rather than just welcoming her to Lanett, the mayor decided to present Metz with the keys to the city.

“With her being sick and wanting to come down and at least be a part of these builds, that would be something to give her something that she could take back to show that we appreciate her,” Heard said.

Metz was overwhelmed by the honor and recognition at the site on Wednesday. She became emotional remembering how the people she had been working with for so many years honored her.

“I was taken aback by the recognition because I always just went, and I was myself,” Metz said. “I just love to train volunteers and help them learn different projects. And I didn’t notice that anybody was really paying attention to me.”

Metz expressed her gratitude and praise for the Fuller Center and her friends there, especially Roberts and Ingraham.

“And thank goodness for Chuck because he’s the one that started the covenant partnership with the Fuller Center,” Metz said.