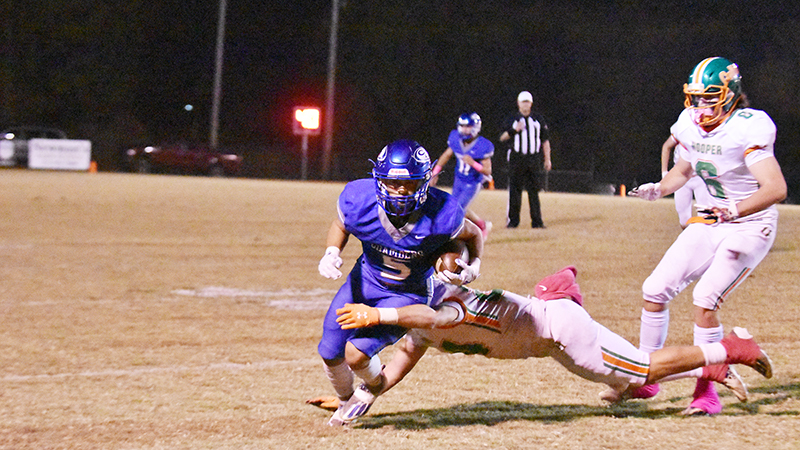 The first half mirrored everything the Rebels have done all year.

The rushing attack once again proved too much for Hooper’s defense, and they kept up the trend of forcing turnovers on defense.

Chambers Academy had five rushing touchdowns split among five ball carriers in the first half alone.

They also opened up the passing game a little bit, but the rush attack solidified their victory.

The Rebels were able to take their starters out in the second half, and their junior varsity players were able to earn some valuable experience.

“We’re pretty good at what we do. We’re a wing-T team. We opened it up a little more at the start and threw the ball. We did some good things, and I’m pleased with where our team is at right now. We know we have to get better, I’m pretty pleased with seven wins in a row after and 0-2 start.”

The Rebels finished the game with six rushing touchdowns from five different running backs, and Allen is happy to have an arsenal of ball carriers.

“It’s nice to have a lot of guys they can key on,” Allen said.

“That’s what a team is. There’s no one man team. I’m proud of our guys. They aren’t selfish, and they came in when their names were called.”

Allen was also pleased with their defense, who continued their trend of forcing turnovers.

“You have to keep getting better,” Allen said.

“They drove the ball on us a little bit, but we didn’t break. There’s things we have to get better at, but our kids are physical.”

Allen is also thrilled that his junior varsity players continue to get valuable experience in the second halves of games.

“When they move up next year, it won’t be new to them.”

The Rebels are now 7-2 and will finish the regular season with a road game against Glenwood next week.

Chambers Academy will host the first round of the playoffs on Nov. 4.