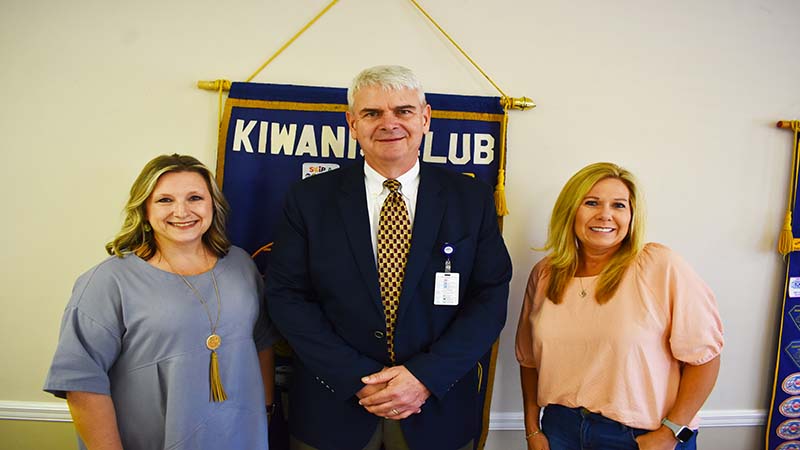 VALLEY — As part of the Nov. 8 midterm election, Chambers County voters will be voting on an extension of a local tax that benefits EAMC-Lanier Hospital. The tax was first approved almost a decade ago. It’s renewed in 10-year cycles, and voters will have their say this year. It will be in the form of a yes-no question on the back of the ballot.

Greg Nichols, executive vice president and administrator for EAMC-Lanier, made a case to extend the tax at Wednesday’s noon meeting at the Kiwanis Club of Valley.

“We would not be open today were it not for that tax being approved nine years ago,” he said. “We still need it. Having it provides us capital funds and shows that the community is behind the hospital.”

There’s a long legacy behind local support for a hospital in the Valley. In the late 1940s, West Point Manufacturing Company employees agreed to give up a day’s pay to help provide the funds needed for the local match. Lanier Memorial Hospital opened in 1950 as the first hospital built in the U.S. with Hill-Burton funding.

Nichols said he was glad to speak to a local audience without Covid being the main topic.

“I have been doing that a lot over the past two years,” he said. “I think we’ve pretty much gotten past Covid now. Our Covid cases have bottomed out. What we are seeing now are flu cases.”

For the first time since the spring of 2020, the hospital staff is now going maskless.

EAMC-Lanier is a bustling place. In the last year, for example, there have been more than 15,000 visits to the emergency room. The lives of many people who have experienced heart attacks or a stroke or who may have been injured in an automobile accident have been saved.

“Our local EMS crews are great,” Nichols said. “They do good work in getting emergency cases to us. In many situations, we will stabilize the patient’s condition and get them to more advanced care.”

Nichols pointed to several improvements that have taken place at EAMC-Lanier since the tax was first implemented. The hospital now has an acute rehabilitation unit.

“We have had many admissions in our acute rehab unit,” Nichols said. “Many of the people being helped by our therapists are from out of town. We are now providing services that not only benefit our local population, but we have people coming here from out of town as well.”

The same is true for EAMC-Lanier’s ambulatory surgery center. Over 2,300 procedures were performed there last year.

The newest addition is the geriatric psych unit. A $5 million renovation was involved. It’s on the hospital’s third floor in an area that offers excellent views of the Chattahoochee River. That view is extremely relaxing for elderly patients needing help getting back to a state of normalcy.

“Some of our patients just want to sit and look at the river,” Nichols said. “It’s very relaxing for them.”

People from the state are already calling it one of the best psych units they have seen.

The tax helped the hospital purchase a new MRI machine, a vital piece of equipment for any hospital.

A complete renovation is underway at the EAMC-Lanier Nursing Home. It’s a six-phase project that will be done over the next two years. It’s being done in a manner to disturb the residents as little as possible.

“We are now in phase 2,” Nichols said. “What’s been done so far is a big improvement. It looks so much more attractive, and the residents are enjoying it.”

EAMC-Lanier is one of Chambers County’s largest employers. More than 450 people work at the hospital, and there’s an $18 million annual payroll that turns over in the local community because it is here.

“Our acute rehab unit and our ambulatory surgery center allow us to showcase Chambers County to the region,” Nichols said. “People like being able to park right outside the door and having a short walk inside. That’s not the case in many hospitals.”

Having a hospital provides a base to draw primary care physicians to the community.

“We have some great doctors and nurse practitioners in our community,” Nichols said. “They are employed by us in the effort to help keep people out of the hospital. Having a local hospital can help attract new industry. It is such a huge asset to have. It is so important for us to continue this tax. It’s critically important to us. Be sure to vote yes on Nov. 8  and encourage others to do so.”

Nichols said it’s important for people to understand that it’s not a new tax. The voters are asked to continue what they have been paying for the past ten years.

While mandatory mask wearing is no longer going on at the hospital, there’s no complacency when it comes to Covid and the flu.

“We are testing for Covid and the flu every day,” Nichols said.

Nichols said the medical pavilion on Fob James Drive is a huge asset for the local community.

“An average of 160 patients a day are going there,” he said. “We are considering having an expansion there.”

One idea is to have an identical building on the opposite side of the parking lot.

Nichols is a native of Heflin and is a graduate of Auburn University and an engineer by training. He joined East Alabama Medical Center in 2003 as director of engineering. He and his wife, Angela, have raised six children. They have lived in Chambers County for the past 18 years.