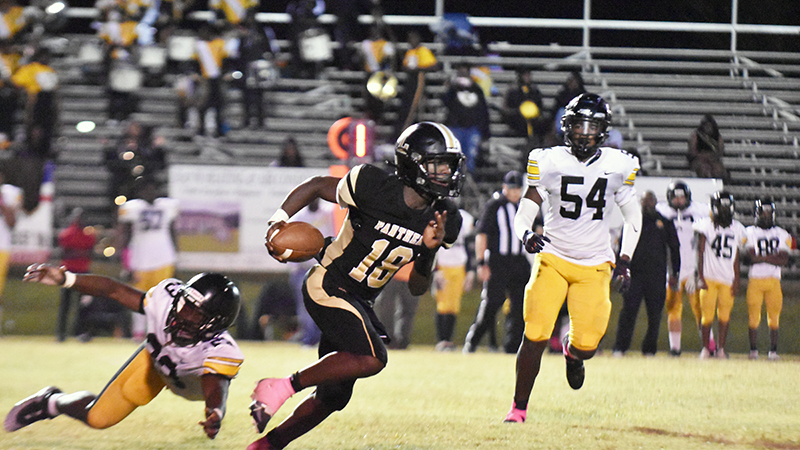 Lanett senior Elijah Whitfield has been a key part of the Panthers’ football team throughout his career.

He didn’t get to be a part of the 2019 state championship team, but he still had some great years playing football at Lanett

Whitfield, who goes by the nickname “Lala,” was a receiver until he was forced to step in at quarterback for the Panthers when Jarrious Goodman broke his thumb.

He also plays safety for the Panthers.

For Whitfield, it’s been a career full of memories.

“My time here has been incredible,” Whitfield said.

“I left in my junior year to go to Brooklyn, but I came back to the team and had a chance to play. Coach [Clifford] Story believed in me.”

Whitfield had to move to Brooklyn for family reasons.

“My family is from Brooklyn, and my mom had the opportunity to go back, so I went with her,” Whitfield said.

“I told my mom, ‘We have to go back to Lanett. I want to finish my years with Lanett. I want to play football and be around people I grew up with.’ I called coach Story, and he told me to come back, so I came back.”

Whitfield stepped up to the challenge of playing quarterback for the second half of this season.

“You have to read a defense and see what plays work and don’t work. You have to be able to lead your team. I play safety too, which is like the quarterback of the defense.”

Whitfield knows that this season has been a challenge for the whole team.

“We’ve had to be able to keep our team together and make the playoffs,” Whitfield said.

“I knew I had a lot on my back going into senior year because we have Highland Home and Luverne in our region.”

Football has taught Whitfield a lot in his time at Lanett.

“I’ve learned how to become a better leader,” Whitfield said.

“I’ve learned how to become a more dominant player and a role model for the younger kids.”

Whitfield will also play basketball for the Panthers.

He also has plans beyond playing high school football.

“I want to play football in college,” Whitfield said.

“I want to get drafted into the NFL. My dream school has always been Jacksonville State. I love the colors and the atmosphere they have. I went to one game before and saw how lit it was, and  I knew that’s was something I’d vibe to.”

Whitfield mentioned that he still wants to play either receiver or safety in college.

“My biggest moment has been being able to be a leader of the team,” Whitfield said.

“I also went out for my first time as a captain.”

Whitfield’s brother, Alajawon, is also a starter for the Panthers.