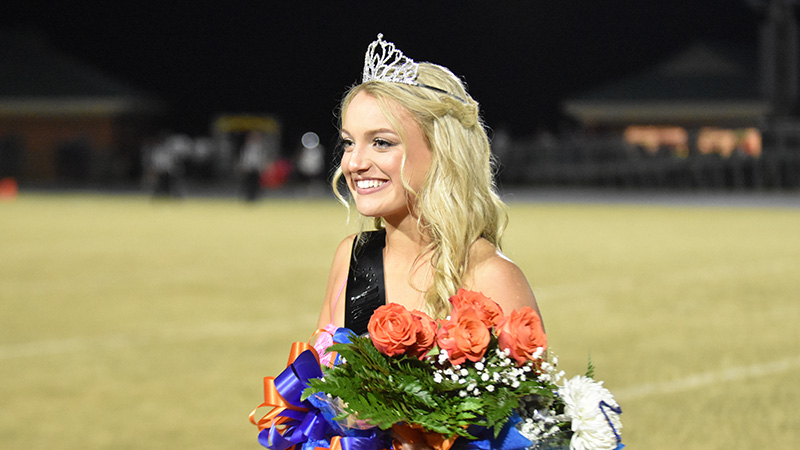 Kendall Godfrey, a senior at Valley High, is a homecoming court veteran. Energetic and always on the move, Godfrey has been an active member of the student population, and it shows when homecoming season rolls around.

Always keeping busy, Godfrey is the secretary of Beta Club. She plays on the varsity cheer, flag football and soccer teams. After school, she also does tumble gymnastics.

Godfrey was on the homecoming court throughout middle school, and this is her third year being nominated at Valley High. Last Friday, Godfrey got the opportunity to wear the crown one last time, becoming Valley High School’s 2022 homecoming queen.

After the homecoming court was announced, Godfrey and her classmates had two weeks to campaign before voting began. Though many on the court brought in sweets to pass out, Godfrey tried a different approach.

“A bunch of people on the court did candy and had little sayings on them,” Godfrey said. “And then I brought biscuits to school.”

During the halftime game, Godfrey and the rest of the court were guided onto the field. Ever the teammate, Godfrey said that she didn’t care whether she won or not. She was just happy to be on the court with her friends.

“They’re all supportive,” Godfrey said. “But I think even if I wouldn’t have got it, I would have been happy because I was just happy to be on it.”

Over the loudspeaker, she heard her name called. In the whirlwind of excitement, one person stuck out to Godfrey most. She could hear her best friend cheering her on above the rest of the crowd.

“Caitlin is really supportive,” Godfrey said. “And each year I’ve been on it, she’s always been there cheering, and I can always hear her out of everybody. It’s just her sticking out. It’s like my favorite part of it.”

After that, Godfrey said the field was in chaos. The crowd converged as everyone took pictures. Not one for the spotlight, Godfrey was nervous to have so many cameras on her. Still, being crowned homecoming queen was worth it all.

“It’s really an honor because it’s not just school spirit,” Godfrey said. “It’s more of like when I view myself I just see that I talk to everybody, and I feel like everybody can relate to somebody that will talk to them.”

This year’s homecoming season felt more special to Godfrey because of the possible merging of Valley High and Lafayette High next year. The homecoming queen title holds generations of tradition that Godfrey said is important to remember.

“I feel like this tradition has always been important but mainly this year because it’s supposed to be the last year of Valley High School,” Godfrey said.

The homecoming queen said that her time on the homecoming court taught her not to let what people think of you get you down.

While Godfrey dislikes confrontation, she always tries to make everyone at school feel heard. After she graduates, that’s what Godfrey will miss most.

“After high school, you won’t see everybody,” Godfrey said. “Everybody goes their own way. It’s kind of sad. I’ve been going to school with these kids since I was four.”

Even so, she has her sights set high as Free Application Week at Valley High winds down.

“I would love to attend college for interior design or architectural design,” Godfrey said. “A bunch of colleges I want to go to do not seem to have that.”

Though she might have to shop around for colleges that offer a program for her dream career, she is excited for the next chapter in her life.