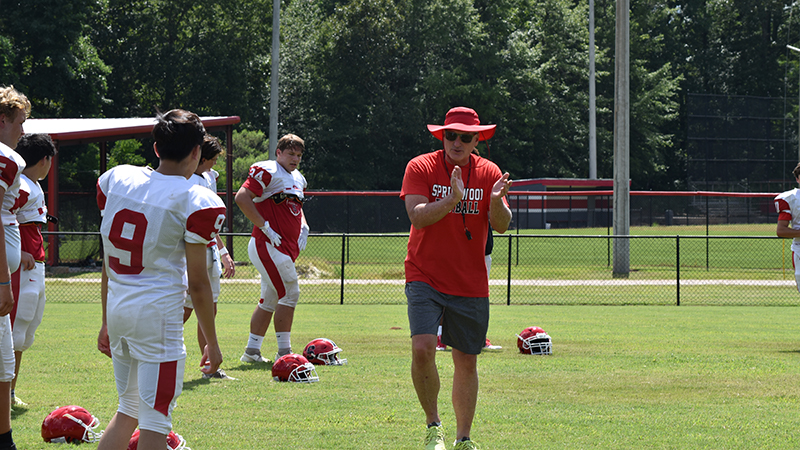 Three teams in the Greater Valley area have clinched playoff spots this season, and two of them will turn their attention to the postseason starting this week.

Lanett, Springwood and Chambers Academy all performed well enough in their region to continue their season into November, but the two private schools were the only ones to win their region.

Lanett secured the four seed in the playoffs, and the Panthers will be on the road against B.B. Comer in the first round of the playoffs.

Chambers Academy will play a revenge game in the first round against Escambia Academy, who knocked the Rebels out of the playoffs last year.

Even though every AISA 8-man team will make the playoffs this year, Springwood clinched the one seed, which will give them home field advantage in the semifinals.

The Wildcats will also have a first round bye.

For Lanett head coach Clifford Story Jr., he knew that his team would struggle early on in the season due to their youth.

“It was tough, especially since we’re just so young,” Story said.

“We just didn’t know football itself. We had to teach every single aspect of the game. Sometimes, you take things for granted that they would know it. We talked about how we needed to address practice daily. That helped us get better each week. Moving forward, I can see a change in our team in all three phases. We have the chance to do something special. You want to be around when the grass is brown. That’s when they playoffs get started.”

Lanett has overcome a lot throughout the season, and Story was able to persevere with his team.

“I told our guys that with the things we’ve faced this year, these are the things that build us,” Story said.

“That’s just called life. We have to play the hand we’re dealt. We’re not going to make any excuses. We’re going to continue to be a close-knit family, and we’re going to continue this together. At the end of every storm, there’s going to be a rainbow. They really bought into it, and they stopped feeling sorry for themselves. They started working and getting better.”

Lanett had to deal with losing quarterback Jarrious Goodman to a broken thumb, but Story feels like that became a turning point in their season.

“He’s just an energetic guy. He’s a leader. Him transitioning to that position helped us a lot. Jarrious is still out, but we’ll play him at other positions that will be beneficial.”

Story is using this week of practice to focus on themselves before they prepare for B.B. Comer.

“This week will just be focused on Lanett,” Story said.

“We have film on B.B. Comer, and they have film on us. We have a really good game plan against them. They’re good at what they do. It’ll be a challenge, but our kids will be up for it. We’re getting better, and we’re peaking at the right time.”

For Chambers Academy head coach Jason Allen, being the one seed in the playoffs is nothing new to him although they had to overcome two early losses.

“The kids know that we know how to win. You just have to explain to them what’s going on. It’s a long season. Our kids aren’t going to fold up the tents after two games. That’s a testament to them. We’ve gotten better every week, and I don’t think we’re the same team we were at the beginning of the year. We’re going to see how far we progressed.”

Allen feels like their season changed when they won three straight after their first two losses.

“There was a three game stretch at home where we beat Edgewood, Crenshaw and Banks,” Allen said.

“I think our team gained a lot more confidence in those games. We took off from there.”

Allen isn’t too focused on the revenge game against Escambia, but he’s focusing on this week’s game against Glenwood.

“We keep our eyes down the road as a coaching staff, but not from a practice standpoint. I don’t feel like preparing for someone for multiple weeks is good. We feel like we have a great routine we’ve been using for ten years.”

The Rebels are ranked fourth in the AISA by the Alabama Sports Writers Association, but their biggest challenger for the state title will be top ranked Patrician.

“You have to get to the state championship first,” Allen said.

“If you don’t get there, it doesn’t matter. We know they run the Wing-T offense like us. We played them for the state championship in 2017. They have the same coaching staff. We’ll cross that bridge when we get there.”

For Springwood, first year head coach Joey Burch took the Wildcats to their first region title in 21 years despite taking over a struggling program.

“We’ve had a lot of turnover in the last three years,” Burch said.

“We were at a loss of what to do when coach Pardue resigned. We needed some stability. The kids needed someone they could trust. We were concerned about even having a season. There were just so many different parts working against us.”

Burch took over the football program late in the summer, and he quickly turned them into a state contender.

“We have a great group of seniors,” Burch said.

“That leadership goes a long way. It hasn’t been a great experience for them, but they have the love and the desire. They believed in each other. They recruited some kids to help us as well. They’re good people.”

Burch is now preparing for the playoffs, and they could play Cornerstone Christian, who beat the Wildcats on a final play in the regular season.

“We always fall back to that game and use it as a learning experience,” Burch said.

“Two weeks to prepare is a long time. We’re going to be able to keep our guys focused.”

For Burch, a state title would be big for Springwood.

“We’re just trying to build a program where our kids will be coached well,” Burch said.

“I wish people would come out and watch the brand of football we’re playing. If you watch a game, you’d realize it’s football. The 8-man part doesn’t even come into play if you’re a spectator. It’s a competitive game. We  want it to be a great experience they can look back on.”