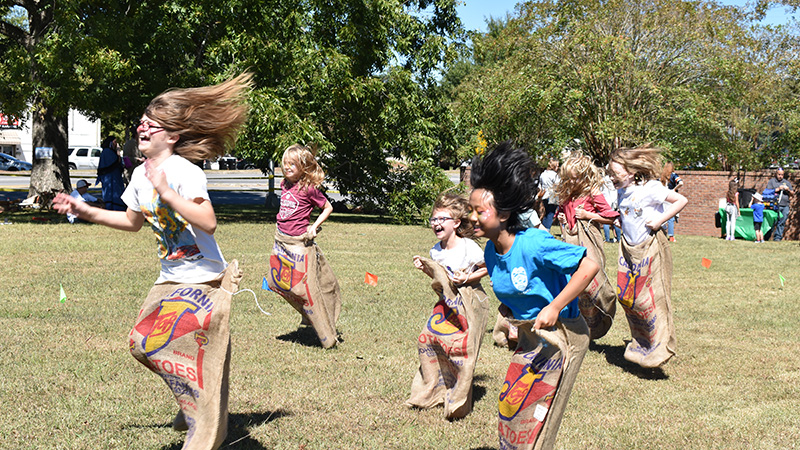 Citizens flocked to the West Point Hawkes Library to celebrate its 100th anniversary Saturday with multigenerational games, a barbershop quartet and a presentation to honor the library’s history.

Outside the library, kids participated in potato sack and egg-on-spoon races, tug-of-war and more while adults gathered around boxes of free books. The Southern Crescent Crooners barbershop quartet sang the classics, setting the scene for the guests who roved about the festivities in their best 1920s garb.

Children and adults alike celebrated with face painting and a traditional treat of lemon with a peppermint stick. There were also food trucks like Kona Ice and BJ’s Butthouse.

“In all the years that we have had Friends, we have never had a problem having on our board not just people, but leaders, and people, who are enthusiastic about doing things for the library,” Hines said in her speech.

During Brown’s speech, the Friends of the Hawkes library honored the living librarians for their care and dedication to the historic library.

The current Librarian Jane Duskin was also present and honored. Another Hawkes leader to be honored was Dr. Lacey Southerland for her work with the children’s program and for putting the celebration together. Ellen Sapp also spoke during the presentation. She spoke about her mother, who was present for the grand opening in 1922. She spoke of how excited her mother was to finally enter the library and that she continued to do so for the rest of her life.

“Hawkes library is a small, intimate library where everyone feels a gracious one and a refuge from the busy world,” Ellen Sapp said during the presentation. “May it never catch up with the times.”

Within the library itself, the Friends of the Hawkes Library set up an educational slideshow about the library’s history. Visitors grabbed a piece of birthday cake and signed up to have their photo taken with the Hawkes mascot and Hawkes Impersonator Garrison Brown.

Another honor by the Friends of the Hawkes library was the restoration of an original 100-year-old table by Marshall Sapp. Southerland thanked Sapp, husband of Ellen Sapp, for his contribution.

“It is about eight feet long and has had many hundreds of children sitting around working on projects, eating snacks and of course, reading books for 100 years,” Brown said. “May it stand for another 100 years.”

Hawkes was an optometrist and philanthropist from Atlanta who dedicated his time to funding several children’s libraries in rural Georgia towns. According to Hawkes’ request, some of the libraries also included theaters that the community could use.  At the time that the building was built, there was a theater directly across the street where community members watched moving pictures.

“The interior of the building is very little changed since opening in 1922,” Ellen Sapp said. “The high windows, simple design and two original fireplaces provide a cozy, nostalgic environment for reading.”

The Hawkes Children’s Library of West Point and the Hawkes Library in Cedartown, Georgia are listed on the National Register of Historic Places. A few of Hawkes’ libraries are still standing, but the West Point location is the only one still in active use as a library.

“To this day, you can sign your name on the library card just as you would in 1922,” Brown said.