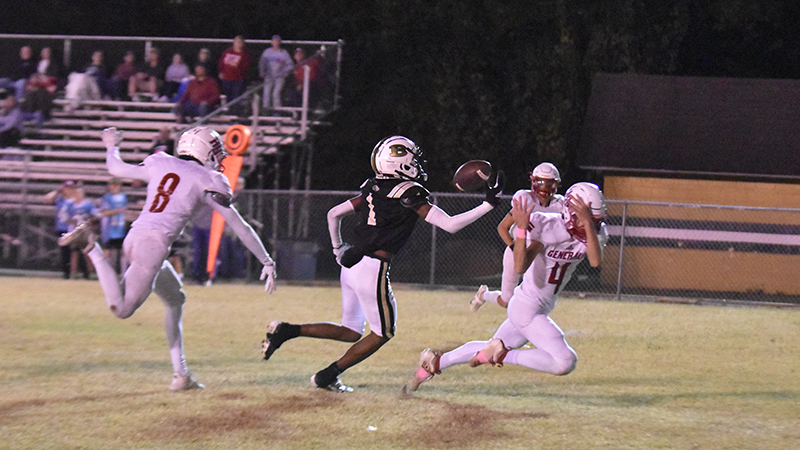 The Beulah Bobcats ended their season with a close 16-13 loss to Horseshoe Bend at Bobcat Stadium on Friday night.

It was an emotional night for Beulah’s two seniors, Noah Higdon and Jason Wilson, as the Bobcats were a dropped pass away from winning the game after senior Higdon took a shot at the end zone on third down.

The first half was a slow battle between two run heavy teams.

The Generals and Bobcats tried to open up the passing game, but it resulted in four total interceptions in the first half, with three being thrown by Horseshoe Bend.

Each Bobcat interception was by a different player.

The Bobcats opened the scoring with a long touchdown run by Demarion Foreman, but they missed the extra point.

It wasn’t long before Horseshoe Bend found the end zone, and took a 7-6 lead into the second quarter.

The Generals kicked a field goal to extend the lead to four, but Beulah put together a solid two minute drive at the end of the first half.

The Bobcats attempted a field goal, but the Generals blocked it to keep the score 10-6 heading into halftime.

Beulah almost let the game get away after a long run from the Generals, but the Bobcats forced a fumble to get another chance.

Foreman scored his second touchdown of the night to give Beulah the 13-10 lead. The Generals drove, but MJ Walton forced his second interception of the game.

Beulah took advantage of a muffed punt toward the end of the game, but the Bobcats fumbled on the next play. This let Horseshoe Bend grind down the Bobcat defense and score to take a 16-13 lead with a minute left in the game.

Beulah mounted a solid drive, but they were unable to get in the end zone. The Bobcats were forced to try a fourth down field goal to tie the game, but it went wide left as time expired.

Beulah head coach Matt Johnson was proud of how his team fought.

“I’m so proud of how our two seniors carried themselves this year,” Johnson said. “Having two seniors isn’t optimal, but we had a rough week because of the flu. Our guys fought. Things will turn around for us.”

Johnson knows that his team is young and that they’ll come back with more experience next year.

“It’s not how I wanted it to end for our seniors,” Johnson said.

“We’re a better team because of their leadership. We’re going to grow as a team.”

Johnson stressed the importance of being in the weight room before next season.

“Hopefully with the weight room and some mental stuff, we can overcome these obstacles,” Johnson said.

Beulah finished the season with a 1-9 record.