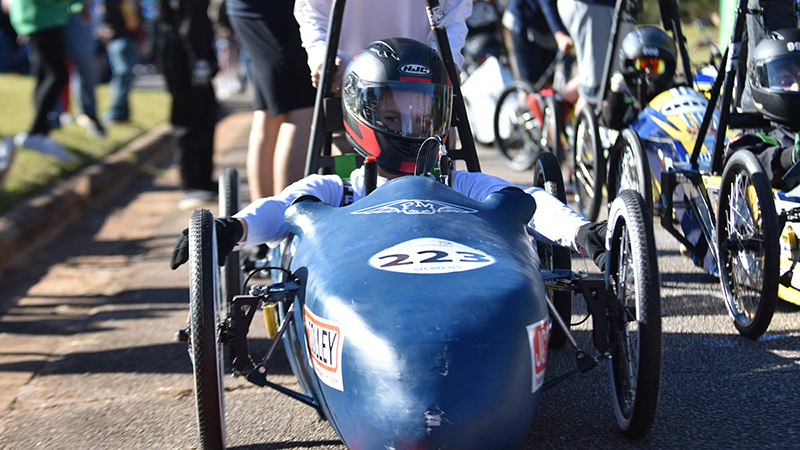 Several schools from Troup County and the surrounding areas joined together as Inspire Academy hosted the first Greenpower race of the season on Saturday.

The race featured ten different teams who each participated in two separate heats.

The race started with the first heat, which featured five middle school teams.

Long Cane had three different cars, and they were the only middle school with a modified car.

There were three separate divisions: stock, modified and custom.

The stock car was a standard electric car built by the schools. The modified and custom cars were faster and more customizable.

Each kit for a stock car costs around $5,500. Sponsors provide a lot of the funds for the cars, and the lottery in Georgia also contributes some money.

Each heat was an hour and a half long, and whichever car finished the most laps in that time earned the most points.

Inspire Academy usually hosts the first race of the season, and head coach Seth Stehouwer was pleased with their win.

“This was our sixth or seventh race we’ve hosted,” Stehouwer said. “We compete in stock for middle school, and the high school team has a modified car. We’re working on a custom car for the second half of the season. We were super happy with how our eighth graders did in their first race ever. Our high school team was composed mostly of eighth grade kids from last year. They did a great job mentoring, and they worked together.”

Inspire Academy has a good track record of engineers within their racing program.

“We have kids who graduated that are working for companies from Tesla,” Stehouwer said. “We have one who is working for Auburn’s autonomous Indy car team. He’s been doing some work with companies that build chassis.”

Stehouwer knows it was a group effort to organize the race with so many teams participating.

“I couldn’t have done it without the parents,” Stehouwer said. “We had some who put in 12 to 15 hour days. They ran the concession stand and the track. It’s a monumental task. They deserve as much credit as I have.”

After the middle schoolers raced, the high schools all faced off against each other.

Each winning team was presented with an award that was manufactured at Inspire Academy.

Although Troup High didn’t win any of the divisions, they still were able to test out their first ever modified car.

“We built our first car last January, and we built our second car this year,” Beasley said.

“Our stock car took second place last year even though we only raced half of the season. It’s now an all-girls team. We’re very pleased with our modified car. Our kids are very excited. They’re very easy to work with, and they’re motivated. These are all the kids that like to do other activities in school, and they’re taking time to do the Greenpower racing. The girls are really excited. They’re very hands-on, and that’s very exciting for them.”

Troup racer Hayden Pope was excited to take part in the event, and he wants this to help him further down the line.

“I think the race is going really well,” Pope said. “I might want to do engineering in college. I’d want to stick to automotives. It’s fun, and you get to make good friends.”

Troup engineer Layne Lamberson also has been enjoying the races.

“This is my first actual high school race,” Lamberson said. “It’s nice to be able to get back in the swing of things. It’s nice to see the new car in action. I think it would be cool to be an engineer like my dad. When I was little, I always worked on cars with him.”

Several of the Troup County High students convinced the school to start a team because they raced while they were at Long Cane Middle.

The next Greenpower race will be held in LaGrange, Georgia on Oct. 15, but it will be a goblin race so only elementary schools will compete.