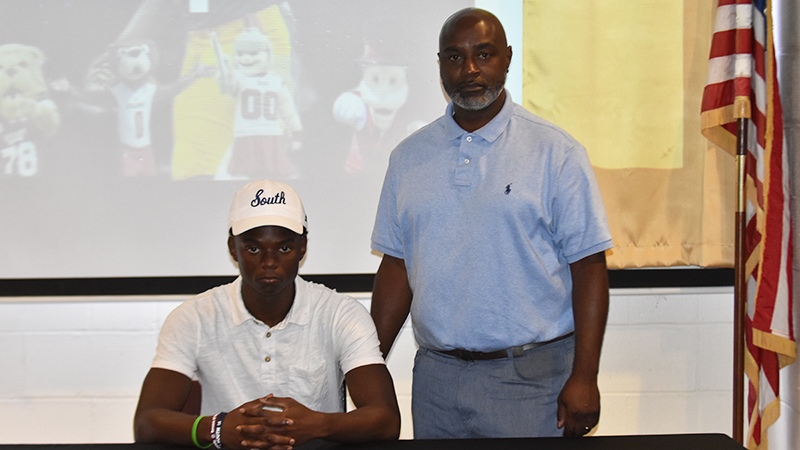 LaFayette defensive back Joshua Combs announced his commitment to the South Alabama Jaguars on Monday.

Although Combs is only a junior, he felt like South Alabama was home for him.

“I went there, and it felt like home,” Combs said. “It felt like a place where I can compete and continue my academic and athletic career. South Alabama was a better opportunity for me. I want to make sure I can be there for the next four years and be successful.”

Combs feels like he can make an impact with the Jaguars.

Combs has been talking to the South Alabama coaches for a few months.

Although he’s committed, Combs is still going to push himself to improve.

“It pushes me to still be better as a player,” Combs said. “I can do what I need to do on and off the field and represent my school.”

LaFayette head coach Juan Williams has been a part of Combs’ career since he was a freshman.

“He’s a great kid,” Williams said. “He’s humble. He’s going to learn and do great things at South Alabama. This young man made his choice of where he’s going to go for the next four years. I’m just proud of him. We’re in the business of giving these kids a chance to leave here and be able to do well.”

Combs and Williams stayed in complete contact during the recruiting process.

“We sat down together and went through everything,” Williams said. “We picked the best place for him. He’s the one that has to go there for four years.”

Williams knows he’ll be able to contribute to the South Alabama program.

“They recruited him as a defensive back,” Williams said. “He’s eager to learn. If he keeps the man above first, great things will be in store for him.”