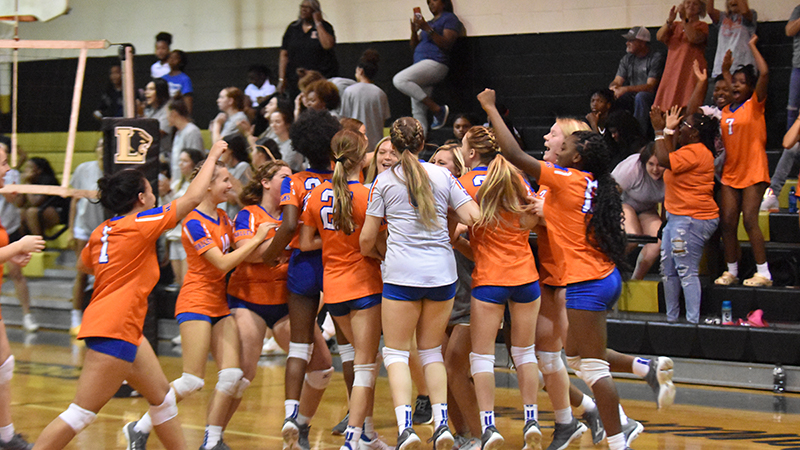 The Valley varsity volleyball team ended its season with a 3-0 loss to Eufala in the area tournament on Wednesday.

It was an up and down season for the Lady Rams who finished 6-9 on the season.

This could also end up being the final season for Valley High volleyball as they could join squads with LaFayette next year.

The Lady Rams never really tilted towards the top or bottom of the area, and they had some good wins in head coach Madyson Messer’s third season.

Valley started off the year with a 3-0 loss to a very talented Lanett team, but they overcame that loss by winning two straight against Notasulga and Russell County.

The Lady Rams had a tough stretch of five straight losses, but they were against difficult area teams like Beauregard and Eufala.

The Lady Rams ended the season strong with big wins over Lanett and LaFayette.

Valley finished third in their area behind Eufala and Beauregard.

For Valley, they dealt with a lot of youth this season despite having three seniors.

The Lady Rams relied on the leadership of their three seniors this year: Madison Chandler, Darcee Wright and Charlee Quinton.

Chandler was Valley’s main setter, but her serving is what stood out in each game.

Wright was dominant hitter who helped the team at the net.

Quinton was also a hitter at the net, but she had a serve that could create issues for the other team.

The Lady Rams will now have to wait until the spring to see where their team is at, especially since the LaFayette players could be joining in for tryouts.

The two teams got a chance to play together earlier this season when they played one mixed set at LaFayette back in September.

The Lady Rams will only have two seniors heading into next season, so adding some players from the Bulldogs could give them the experience they’ll need.