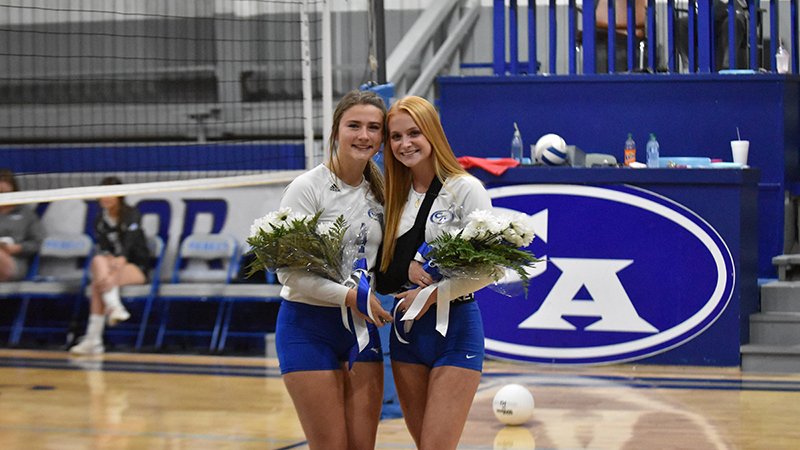 The Chambers Academy varsity volleyball team fell to the Lakeside Chiefs 3-2 on Tuesday night, but the game was an opportunity to honor the only two seniors the Lady Rebels have.

Carley Forbus and Avery Whorton were the two seniors, and only Whorton played as Forbus was dealing with an injury.

The Lady Rebels came out strong with a 26-24 win in the first game, but the Chiefs kept the entire game close up until the fifth game.

The Lady Rebels lost the fifth game 15-13, but they were close the entire time.

For Forbus, she was upset that she wasn’t able to play in their final home game.

“It’s upsetting to lose, but I wasn’t able to get on the court,” Forbus said.

“Watching the game for everyone else and my teammates was a big win in my heart. Mentally, I was on the court with those girls. It makes me proud.”

Volleyball taught Forbus teamwork over her career at Chambers Academy.

“You can play for yourselves, but once you get that team mentality, everything changes. It taught me how to stay patient, especially this year. Not being able to get out there has taught me how to be proud of every single person no matter where they’re at on the court.”

Forbus is going to miss playing with her teammates after this season.

“I’m going to miss the family and the atmosphere here,” Forbus said.

“It’s amazing, and I’m definitely going to miss it all.”

For Wharton, she was emotional after almost getting their first win of the season on senior night.

“I feel like we should have won, and we gave it our all. It wasn’t enough. It’s hard with it being my last home game.”

“It taught me how to be a team player and trust your teammates,” Whorton said.

Wharton will miss not only the team but playing with her other senior.

For Chambers Academy head coach Jessica Patterson, she was pleased with her girls’ performance on Tuesday.

“This is the best they’ve played all year,” Patterson said.

“We’ve really been trying to teach team first mentality instead of me first mentality. I felt like today they played for the team first. I don’t know if they did that for Carley. When you play for the team first, great things will happen. They were phenomenal tonight. If they want to be ticked off tonight, they’ve earned every right to be ticked off. I felt like that was their win tonight.”

Although Patterson has only been with the team for not even a full season, she’s going to miss her two seniors.

“Carley is such a leader and team player,” Patterson said.

“She’s a good person. She always lifts others up. Avery is my spitfire. She’s so passionate. She never gave up in practice. She kept working. We watched her grow into a team player. I’m going to miss that she makes us laugh. She reminds me a little bit of me. I wish they could end their season with something good.”

The Lady Rebels will travel to face Edgewood on Thursday.