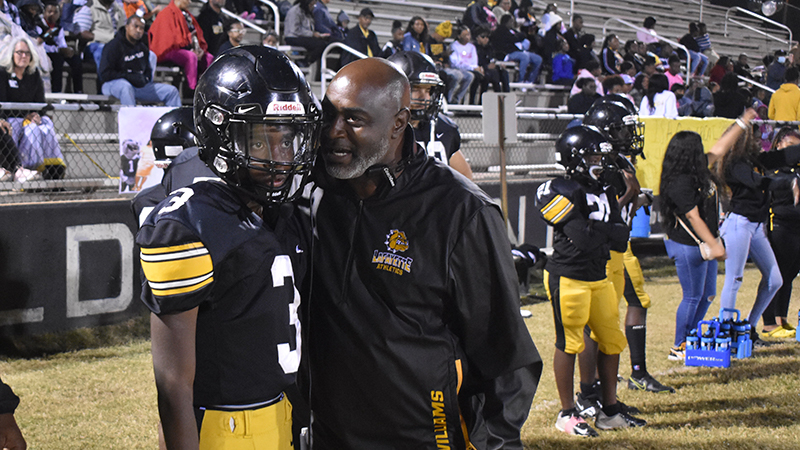 Friday’s LaFayette High football game was Senior Night. It was not just not the final home game of the year but possibly the final LaFayette High School game in Bulldog Stadium. Should school consolidation go through as expected, there will be a new high school in Chambers County, and it’s unclear what the future of the stadium might look like.

Coach Juan Williams’ Bulldogs had a tough opponent to play in the game that brought down the curtain on a beloved place to play. The 8-0 Highland Home Flying Squadron came to town as the No. 2 team in Class 2A, just behind the Fyffe Red Devils. The visitors left town 9-0 with a 41-14 win over the Bulldogs.

Highland Home’s unusual nickname comes from a bit of the Crenshaw County town’s history. During World War II, the U.S. Army Air Corps trained pilots there. The unit was called the Flying Squadron, a name later adopted by the high school football team. The school’s fight song is from the 1965 movie “Those Magnificent Men in Their Flying Machines.” The band plays it after every Highland Home touchdown. They played it six times in the first half on Friday.

The Flying Squadron scored six touchdowns to have the game well in hand at intermission, leading 41-0.  The game was shortened to six minute quarters in the second half, and the Bulldogs mustered two touchdowns against Highland Home reserves.

The loss drops LaFayette’s record to 2-6 on the season. They close out the season next Friday at Luverne.

Major college prospect Keldric Faulk had a terrific game for the Flying Squadron. The 6-5, 260-pound defensive end was unblockable all night long. The Bulldogs couldn’t run to his side of the field, and on passing plays the LaFayette quarterback rolled right on almost every play to avoid his pass rush. Even so, he batted down several passes and had a couple of sacks. On offense, he caught a 37-yard touchdown pass.

The Bulldogs are officially eliminated from playoff contention, and things won’t get any easier as they have to travel Luverne, Alabama to face the Tigers, who are third in the region.