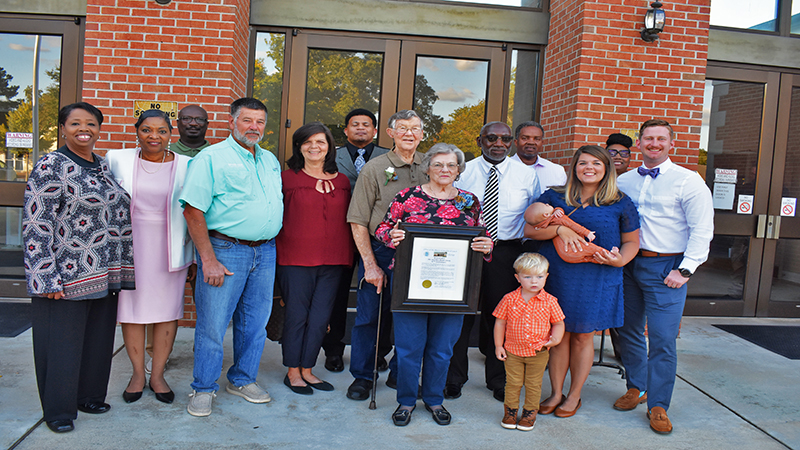 LANETT — A Lanett couple who has been married for 67 years was honored by the Lanett City Council on Monday. Floy and Floyd Aikens were married on Sept. 17, 1955. They were only 13 years old when they first met at Shiloh Baptist Church in rural Chambers County. At the time, Floyd was growing up in the Milltown community and Floy in Lanett. When Floy was a senior at Lanett High in 1955, she invited Floyd to accompany her to her senior class picnic and a storybook romance followed. After returning from her senior class trip to New York City, Floyd surprised and delighted her with a diamond engagement ring.

“The Aikens have lived a blessed life, being parents to three sons (one deceased), four grandchildren and three great grandchildren,” a mayor’s proclamation reads. “Congregants of Happy Valley Baptist Church were fortunate to have had Floyd preach to them for 19 years. He retired at age 62. Mrs. Aikens worked for Dr. James and John Morgan. They currently serve in West End Baptist Church.”

Lanett Senior Center Manager Sandra Thornton told Mayor Jamie Heard and members of the council that the couple is very active in the senior program. Floyd is currently the president and Floy is the secretary. Thornton said Floy has some of the most beautiful cursive handwriting she has ever seen.

While the couple was being recognized with the proclamation in front of a large crowd gathered inside the council chamber, Thornton pinned fresh flowers on their lapels. The flowers were courtesy of It’s a Family Affair.

The couple is unique in that only the letter d separates them from having identical names. They are possibly the only couple in the world who have been married 67 years to have that distinction.

Mayor Heard asked them if they have any advice to offer younger couples to maintain a harmonious relationship that lasts many years. Floyd said that disagreements always happen between people, but the main thing is to know when to hold your tongue and keep matters from escalating. He sounded much like a Baptist minster knowing when to turn the other cheek.

“We have had a good life together,” Floy said.

Mr. and Mrs. Aikens were previously honored by Alabama Governor Kay Ivey for their lengthy marriage. She included them as members of a special senior hall of fame for Alabama couples who have been married for at least 65 years.

Members of the council took turns congratulating them on their long-term commitment to each other and the example they set for younger married couples.

Three generations of the Aikens family were there to witness the presentation. They included son Randall Aikens (with daughter-in-law Cathy Aikens), granddaughter Candace Robbins (with husband Conner Robbins) and great-grandsons Ollie Robbins and Archie Robbins.