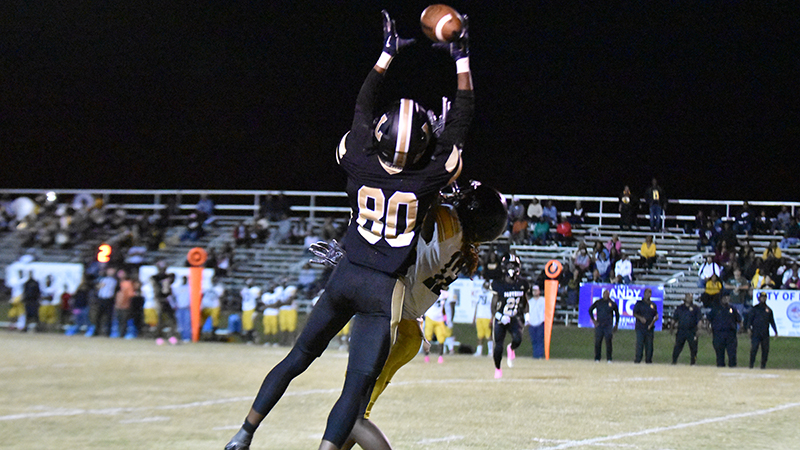 The Lanett Panthers might have ended the Lanett-LaFayette rivalry with an assertive 45-8 victory over the Bulldogs at home on Friday night.

Lanett has now won six straight over LaFayette, and they’re in a much better spot in the region than they were a week ago.

The first half of the game was a dominant defensive performance from the Panthers, and the Bulldogs couldn’t stop Lanett’s rushing attack.

Even though the Panthers were without starting quarterback Jarrious Goodman, they were still able to put up 39 points on offense behind Elijah Whitfield.

“I think we had a great game plan,” Story said.

“Elijah Whitfield is getting a lot better at quarterback. We were able to put our athletes in space and make plays. I tip my hat off to LaFayette. They played hard. We were just a better team tonight. We have to get better each week. The offense and defense are adjusting better. If we can keep getting better each week, we can end this thing strong.”

Story was also pleased to get the win over his alma mater in what could be his last time coaching against them.

“You want to go out with a bang against your alma mater. I don’t know if it’ll happen again or not, but any time you get a win, it’s always a positive. We have to beat Goshen to get in the playoffs.”

One area Story wants to improve on is his special teams.

“It was a lot of mental lapses,” Story said.

“We were trying to keep the ball out of Joshua Combs’ hands. At the end of the day, they’re young. We’re going to make mistakes, but we need to keep coaching them.”

“We didn’t show up,” Williams said.

“If you don’t show up against a good team, this is what happens. That’s on me. We didn’t play the rivalry.”

Williams is more focused on his team than whether or not this was the last game of the rivalry.

“I apologize to LaFayette. We didn’t get this done tonight. We just have to go play.”

Lanett improves to 3-5 on the season, and their road game against Goshen next week could decide whether or not they make the playoffs. LaFayette falls to 2-5, and they’ll have to face region leader Highland Home.