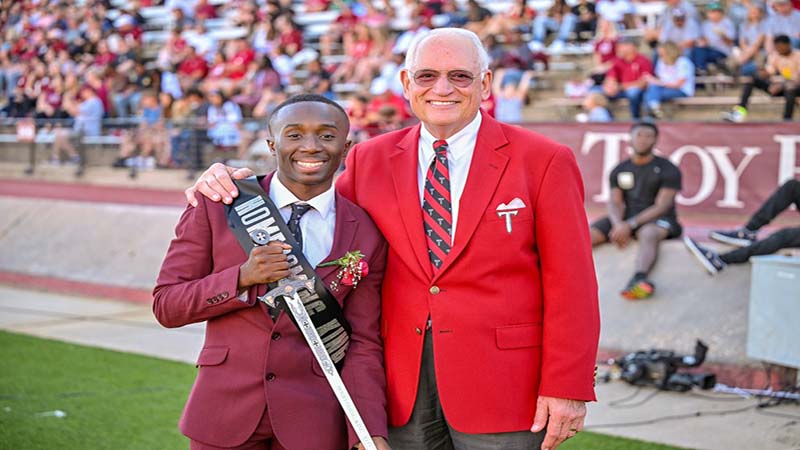 Overcoming obstacles and connecting with people seems to come naturally for Tairrque Baker. Even so, the Troy University senior said being crowned 2022 homecoming king feels surreal.

A native Lanett, Baker has always been a proud member of his community. While at college, he became the president of Kappa Alpha Psi fraternity, a member of the SGA, an impact and parent orientation leader and a Trojan ambassador.

“Being yourself, it’ll definitely pay off,” Baker said. “I’m one of those people that worked extremely hard, but I’ve never tried to be anyone other than myself. But my parents raised me to be yourself and some day somebody is going to recognize that.”

Baker’s popularity and achievement did not begin at Troy University. Before graduating in 2019, Baker was made Mr. Lanett High School, and he carried his Lanett pride with him to college.

Though he was offered scholarships from larger schools like University of Alabama and Jacksonville State, they simply didn’t offer the campus environment that Baker envisioned.

“I know going to Lanett High School, it was a smaller high school,” Baker said. “I definitely wanted a smaller classroom family environment and they really offer that here at Troy.”

Enjoying his small class sizes, Baker studied Interdisciplinary studies while at Troy and minored in Military Science. Never idle, he will be commissioned as a second lieutenant in the Army after graduation.

Baker was nominated by his fellow Kappa Alpha Psi fraternity. For two weeks, Baker campaigned both on campus with flyers and posters and on social media. His active presence with his classmates paid off during student voting when he made it to five remaining candidates.

“I realized that during my time here at Troy, I made an impact on people that maybe I’ve never even had a conversation with,” Baker said. “They would see me on campus or see me speaking to people just saying hi, checking on people…Just being that bright spot for some people.”

After making the final five, Baker then had to complete an interview with a panel. His resume of goodwill and achievement at Troy seemed to speak for itself.

Finally, the moment had come to announce the king and queen. During the second quarter of the game, Baker and the rest of the homecoming court walked out on the field.

“It was a pretty exciting moment,” Baker said. “I was really, really nervous walking onto the field, but regardless of whichever way it went, I was very grateful to be there.”

When Baker heard his name called, he found himself crying. The new homecoming king’s thoughts were on the path that had led him here. With his parents cheering him on in the Troy University stadium, Baker’s time at Lanett high school was at the forefront of his mind.

“It definitely was a process,” Baker said. “Me being crowned homecoming king didn’t start when I got the Troy. It started when I was at home…It was just an accumulation of a lot of things. It was definitely a build-up to everything that I worked hard for.”

In addition to being named Mr. Lanett High, Baker was also high school class president. His time at LHS prepared him for the hard work and achievements that he would soon face at Troy Univesity.

Baker was grateful for everything that he learned and hoped to spread the same positivity to those back in his hometown.

“If I could leave a message for anyone maybe reading this in my hometown, just walk into any room yourself, confident and feeling like you’re supposed to be there,” Baker said.

Baker will make use of his insights and experience as a leader next year as a second lieutenant of the Army. Though he doesn’t know what his job assignment will be, he hopes to be placed in aviation flying planes or to be a signal officer.