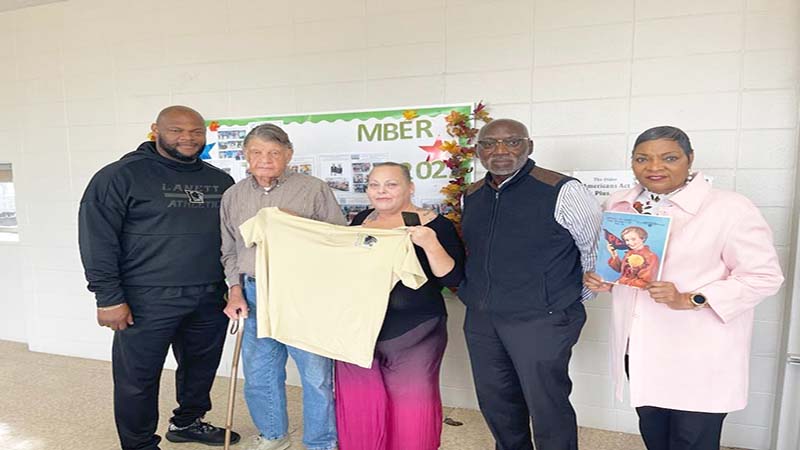 LANETT — Long-time Lanett resident Staley Hill celebrated his 79th birthday on Tuesday by giving away something, receiving a treasured item and getting a new nickname.

Hill has been a loyal Lanett High football fan since he went to school there in the 1950s. It was a golden era for the Panthers. Blessed with future Auburn and pro football stars Richard Wood, Jimmy Jones, Bobby Hunt, Richard Wood and Mailon Kent, Coach Mal Morgan coached LHS teams to great success. The school won state titles in 1957, 1958 and 1963.

Hill said he’s been a huge Lanett fan since he was 15 years old. Over the years he has compiled a huge collection of game programs and scrapbooks with clippings from The Valley Times-News of Lanett games from the 1950s until the current time.

On Tuesday he gave much of his collection to current Lanett High Coach and Athletic Director Clifford Story. The collection includes items from the Mal Morgan era to the current Story era and has many articles about the teams from the 1950s and Coach Story’s two state championship teams of 2017 and 2019.

Hill has taken exceptional care of his collection. The news clippings look as if they were cut out of a newspaper yesterday, and the game day programs look like are for this week’s games. Some of them are from LHS road games to places like LaGrange, Alexander City and Eufaula.

The presentation took place at the Lanett Senior Center, where Hill is today a very active member.

He was accompanied to the Tuesday meeting by his wife Karen.

“This is a great day for Mr. Staley,” Mayor Jamie Heard said in welcoming everyone. “He has been talking to me about this for a long time. Thank you for being a long-time supporter of Lanett High. We appreciate that. We hope you enjoy your birthday and will have many more to come.”

Next up to the speaker’s lectern was Coach Story.

“It does my heart good to speak on behalf of Mr. Staley,” he said. “He’s not only a great fan for Lanett High but a good friend. He comes over almost every day to check on the field and talk to me.”

Hill and his wife live just across the street from the Lanett High campus.

“He’s a good lookout for us,” Story said. “If anyone is on campus on the off hours, he can tell you what kind of car they were in and what they looked like. I have learned so much about the history of Lanett and of Lanett High athletics by talking to him.”

Story thanked Hill for the presentation and in turn made him an honorary coach.

“This is the same kind of shirt all the coaches wear in our games,” he said.

Hill looked very surprised and touched by the gift.

“You need one of these because you are always telling me how to coach,” he joked.

All kidding aside, Story said that Hill is never critical toward him and of Lanett High coaching in general.

“He has always been so supportive of us,” he said.

Hill got a loud round of applause as he showed his new shirt to his fellow seniors.