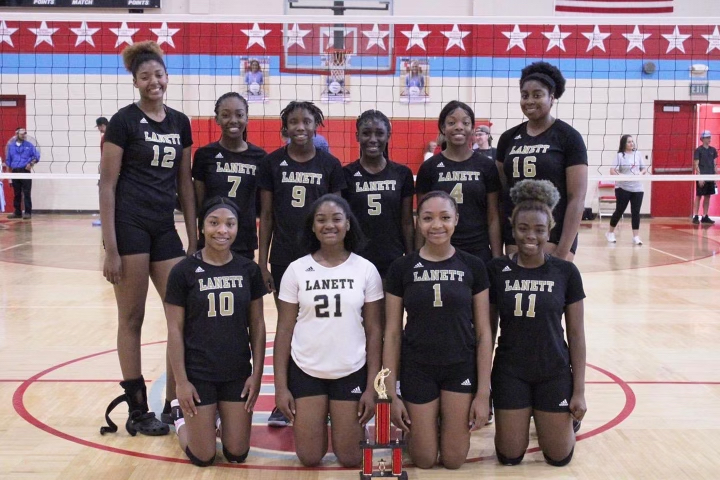 The Lanett varsity volleyball team advanced to the regional tournament after beating Reeltown 3-2 in the area tournament on Saturday.

The Panthers lost to Horseshoe Bend in the area championship, but they still qualified for the regional champion with the win over Reeltown.

The Panthers beat Reeltown in another five game thriller back in September.

Lanett will now 15 other teams in the regional tournament, and they’ll have to face Bayshore Christian, who won the area one tournament.

Lanett head coach Krisse Story was pleased with her team’s performance, but she was hoping for an area championship.

“We finished as runner-ups,” Story said.

“We were up 2-0 on Reeltown, and then they forced a fifth set. Thankfully, we were able to pull it 0ut. We haven’t been successful against Horseshoe Bend all season long, so they beat us in three sets. Our girls played hard. I saw a lot of fight in them on Saturday. We don’t play on Saturdays, so they weren’t really used to it. I was pleased with the effort I saw.”

Story is happy that their season will continue in the regional tournament.

“I’m excited that we get another opportunity to play,” Story said.

Story doesn’t know a lot about Bayshore Christian’s team since they’re from the coast, but she’s preparing her team the same way she would for any other game.

“I told our girls to do what they’ve done all season long,” Story said.

“They need to continue to play together and work hard. We’re out for fall break, but we’re going to practice. We’re going to play hard regardless of who we’re playing.”

Story knows there are things her team needs to improve upon before their game on Thursday.

“We still had a few too many dropped passes,” Story said.

“Our defense still needs a bit of work. We need to get that fine tuned. Our serving was great. Our blocking was amazing. Sometimes our girls get confused as to who should get the ball when it gets to our side of the court. We should be OK if we get that fixed.”

Bayshore Christian has played twice as many games as Lanett this season, and Story feels like that could make a difference.

“They didn’t have a great record, but they played a lot of volleyball,” Story said.

“Records don’t matter. It makes a big difference with them playing that many games. They have a lot of experience. We had a couple of games canceled. We just haven’t played that much volleyball. We only played 13 matches. I’m happy with our record, but that’s going to make a difference.”

Lanett will face the Eagles on Thursday at 1:45 p.m. CST at the Cramton Bowl in Montgomery.