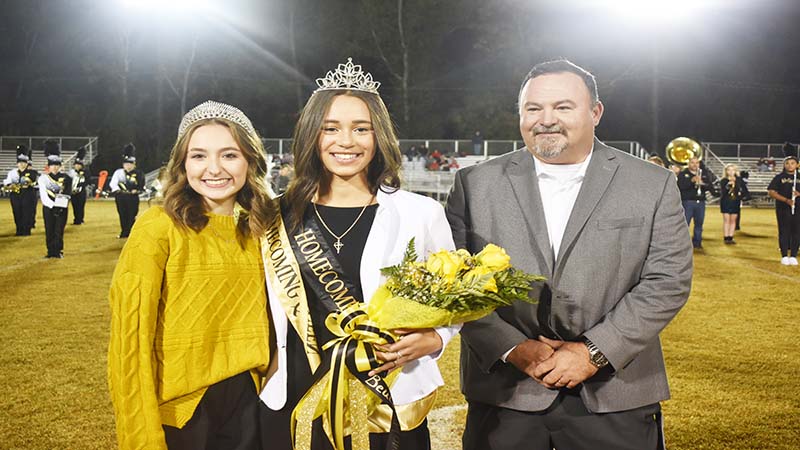 After four years of involvement in programs and sports teams, Beulah High School senior Amya Dunn was recognized by her peers as Beulah High’s 2022 homecoming queen on Oct. 21.

Dunn, a self-professed people-person, is involved with multiple organizations on campus. She is the vice president of FCCLA and member of FTA and a group leader of FCA. She is an editor of the yearbook committee and a member of the prom committee.

“I really like to make sure other people are OK, and they’re not uncomfortable,” Dunn said. “With new friends comes new opportunities.”

However, Dunn’s true passion lies in her varsity volleyball and softball teams. She has learned life lessons and gained many friends from them, including those who were on the homecoming court with her.

Being on the two teams taught her the importance of relying on her teammates for help and always staying positive.

“You’re always going to need help,” Dunn said. “You always have to stay positive. You can’t give off negative energy toward others.”

True to her outgoing nature, Dunn has joined Future Teachers of America. In FTA, Dunn and her classmates go to the elementary school to work with students with disabilities.

“I would like to work in special education,” Dunn said. “Since I’m just now starting it, I’m just seeing if I’d actually want to do it and actually have the heart for it.”

During the homecoming parade, the senior homecoming court candidates rode together in a Jeep throwing out candy to children. Beulah High School celebrated its homecoming game with a pep rally, parade and dance last week.

Dunn’s best friend and volleyball teammate, Jasmine Karch, joined her on the senior homecoming court. Dunn said her favorite part of homecoming week was spending time with the other senior court candidates during the parade.

“I really liked the parade having all three of the senior homecoming court candidates spending time together,” Dunn said. “Just showing that we support each other and no matter who wins, who loses, it doesn’t matter.”

As the homecoming court representatives walked out onto the field last Friday, Dunn worried that she would trip in front of everyone. Her fears were forgotten when her name was called. Dunn remembered how she did a chest bump with one of her friends in her excitement.

“That was probably honestly the most exciting part for everybody, the chest bump,” Dunn said.

Dunn has set her sights on college after she graduates. She would like to attend Jacksonville State University for early childhood education or Lurleen B Wallace Community College for their volleyball team and their education program.

Next year, what Dunn will miss most is her teammates and coaches on her varsity volleyball and softball teams.

“I think that’ll probably be what I miss the most because they’re like my second family,” Dunn said. “I’m with them all the time.”

Being crowned queen has meant a lot to Dunn. She said the role is important because the homecoming queen represents the school. By winning the title, Dunn also said students are encouraged to stay connected with the development of the school.

“I think if you’re crowned homecoming queen, you’re somebody who can represent Beulah High School very well,” Dunn said. “I feel like it’s meant for somebody who does a lot for the school and who is involved a lot in the school.”

Still, the homecoming queen wasted no time in assuring that everyone on the court was equally deserving of the role.

“I would just like to say that everybody that was on the court could represent Beulah High School amazingly,” Dunn said. “We have a great group of girls.”

Getting to be Beulah’s homecoming queen has taught Dunn to enjoy high school and stop rushing through it.

“Don’t waste a moment of high school,” Dunn said. “Since I’ve been here, I was like, ‘Oh my gosh, I can’t wait to graduate,’ and then it’s here. Don’t take high school for granted. You don’t want to grow up.”