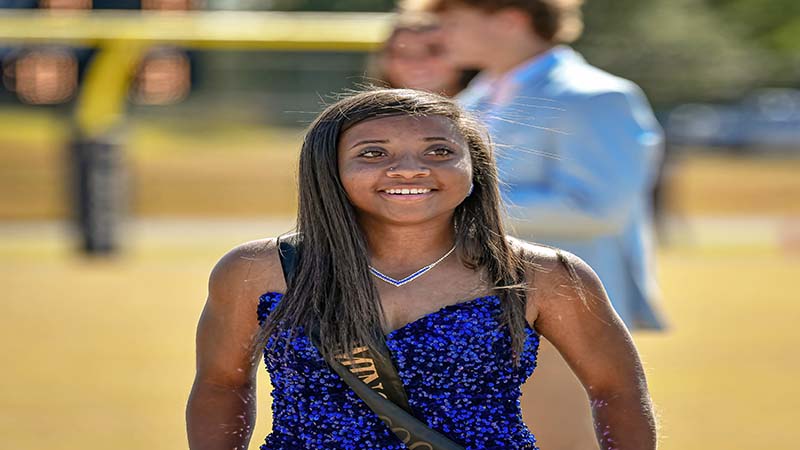 Amid the Point University homecoming weekend celebration, Kyra Hart remembered one moment with clarity. The senior walked out on the field with her brother, Paxton Hart Jr., without much preparation.

“Everything happened so fast,” Hart said. “They needed two from each sports team, and I didn’t realize I was one of the last selected.”

Point University held its homecoming events on Oct. 21-22. The weekend was packed with celebration, from alumni events to the unveiling of the new mascot. At halftime, Hart was crowned 2022 homecoming queen.

Hart is an exercise science major. Consequently, she is on the women’s basketball team as well as the Tribeta Honor Society, a society for students of biological science. However, true to her faith, Hart’s favorite club is Feast, a christian club that meets weekly for service and then games.

Two passions have shaped Hart’s time at Point University: her faith and her love of basketball. Hart has been playing basketball since she was twelve years old. Her drive for the sport was motivated by a shared passion with her brother, Paxton, who was also an athlete.

Hart’s faith has also played a major role in her time at Point University. As she grew in her relationship with God, she found a truer sense of self and felt more at peace. Hart attributes many of her blessings to God and tries to be a positive impact on those around her.

“I would have to thank God because there have been many blessings coming my way,” Hart said. “I feel that it was all God’s doing even being crowned, so huge thanks to the man above.”

As the homecoming queen was announced, Hart’s brother was talking to her, and she missed her name being called. She only became aware when she realized her teammates were shouting their celebration.

“It happened so fast,” Hart said. “And then when it was called, I heard my teammates. They sat right in the front and that’s all you could hear.”

Hart’s teammates and family were sitting together in the front row. Hart’s fondest memory of the night was seeing the two groups cheer her on as she was crowned.

“I think that probably could have put me in tears,” Hart said. “The support system was just there.”

Hart was honored to win homecoming queen. She felt being crowned was an affirmation that she is impacting people in a positive way.

Hart is excited to start her career next year so that she can continue to be an impact on her community.

She would like to get her master’s degree in counseling, but she also hopes to become a basketball coach and own her own basketball organization one day.

“I’m coming to the fact that I have to put the ball down because I am a grown lady,” Hart said. “I like to help people. So if I can impact in any way, I’m ready to see that.”