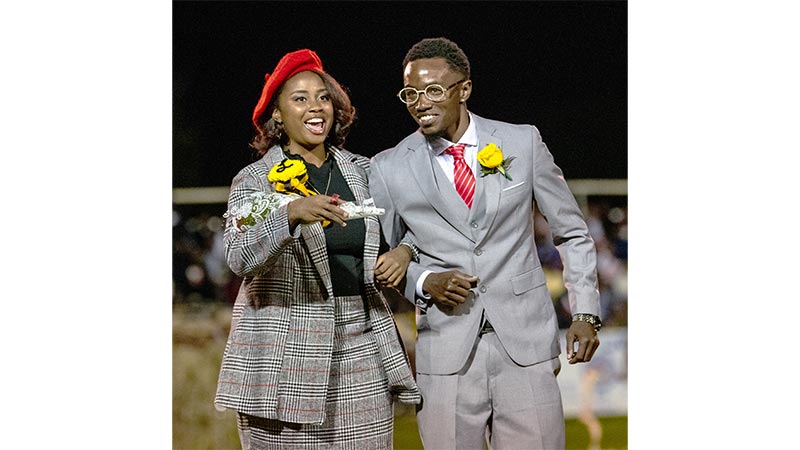 Nautica Billingsley, a senior at Lanett High School, has worked diligently throughout her high school career to be a good example of kindness to her fellow students. Those years of work finally paid off, as Billingsley was announced as the LHS 2022 homecoming queen during the football game on Friday.

Billingsley has spent all four of her high school years at LHS and has been involved in a number of extracurricular activities, including band, athletic training, the chess club and the Family, Career, and Community Leaders of America (FCCLA) service club.

“My favorite is probably the chess club,” Billingsley said. “I really love playing and watching the game; it is a lot of fun.”

Billingsley noted her excitement as she waited on the field to hear if her name would be called for homecoming queen.

“I was really nervous because I had worked really hard to be queen, and I wanted to see if I was going to win,” Billingsley said. “When I heard my name called, it felt really nice and I was so excited.

Her family was also very proud and excited about her accomplishment. Billingsley noted that one of her family members tried to run onto the field when her name was announced. She also said that her brother and escort for the evening, Santerio Potts, was especially proud.

“[Santerio] knew that I was going to win before my name was called,” Billingsley said. “When they were about to announce the winner, he told me to get ready because it was going to be my name. Afterwards, he congratulated me and told me how proud he was of me.”

Billingsley also said that while she was excited to be homecoming queen, it was also a bittersweet moment as she realized that this would be her last year at Lanett High School.

“I have loved being a student here, so it is a little sad to think that I am going to be leaving at the end of the year,” Billingsley said. “I have made so many memories and friendships while I have been here.”

Billingsley gave advice to future students looking to be selected as homecoming queen or king.

“The big thing is that you have to be nice and supportive of other students,” Billingsley said. “I would also say that you really had to do a good job of campaigning. I made a lot of posters, plus I gave out goodie bags and chocolate covered strawberries.”

She noted that after she graduates, she wants to attend a junior college or a technical school where she can get real-world experience and training as a welder.

“I am really excited for the future, and I am looking forward to seeing what happens after college,” Billingsley said.

When asked for any additional comments, Billingsley took time to thank those who had supported her through the process of becoming homecoming queen.

“I want to thank my family and friends who helped me with my posters and goodies bags, and thank you to everyone who voted for me for queen.”