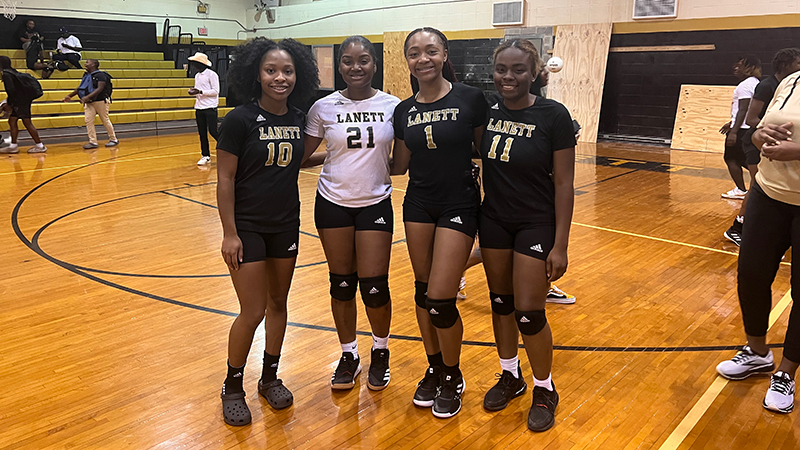 Both the Lanett varsity and junior varsity volleyball teams swept the Notasulga Lady Devils on Wednesday for the Panthers’ senior night.

The junior varsity team won 2-0, and then the Panthers celebrated their seniors before the varsity game.

The varsity team faced little resistance as they beat Notasulga 3-0, but the night was more important to the seniors than anyone else.

For Lanett head coach Krisse Story, she was happy for her seniors to play in their final home game of their Lanett careers.

“It was an exciting time,” Story said.

“Most of these girls have played for me for four years. “

For the seniors, this game meant a lot to them, especially since the team lost their assistant coach, Kawana Tucker, right before the season.

“I’ve been playing since junior high. This season is special because we’re doing it for Ms. Kawana. Our football players came out to support us, and we love them.”

Senior Jakiya Little will also miss her time at Lanett.

“We’ve been playing volleyball since eighth grade. This season is for coach Tucker. We’re doing this for her.”

Little mentioned she didn’t have a favorite memory of playing at Lanett because there were so many.

“I was just in the ninth grade. Our team is something like family, so volleyball taught me to treat people like family.”

“It feels good, but it feels sad at the same time,” Johnson said.

“My favorite memory was just playing volleyball together with my team.”

Story will also miss all four of her seniors.

“They bring so much energy,” Story said.

“This group has just shown the most leadership of any senior group I’ve had. They know each other. They’re a very athletic group, and they bring that family atmosphere to the team. I’ll miss that the most.”

Story mentioned her team’s faith got them through the difficult year.

“We have pastor Latika Spencer at Destiny Harvest here in Lanett,” Story said.

“She does motivational Mondays with us, and that has been very instrumental to our girls. It’s helped them show leadership. It’s been those seniors who have filled those gaps and helped us in those tough times.”

With her team now clinching the second seed in the area tournament, Story is looking ahead to the game against Reeltown.

“I feel pretty good about our team,” Story said.

“Horseshoe Bend will host the tournament on Oct. 15. We have to play Reeltown, who we struggled with, but it’s tough to beat a team three times.”

The Panthers will finish their regular season at Beulah Thursday night.