Point football wraps up recruiting weekend with win over Union 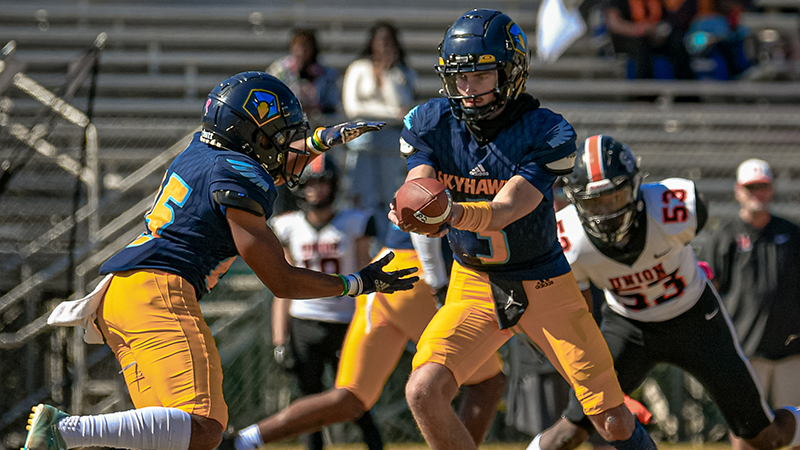 The Point Skyhawks earned their second win of the season with a 16-13 thriller victory over the Union Bulldogs at Ram Stadium on Saturday.

The game wasn’t just homecoming for the Skyhawks, it was also a huge recruiting weekend.

Head coach Trevor Zeiders knows how important the win was for the program.

“It’s always good to get a win,” Zeiders said.

“It doesn’t matter how it happens. A win is a win. There were good things and bad things to it. We didn’t play as well as I had liked. We came out flat. I don’t know if it was because we took their record into account. Once we got going, we were able to secure the win late.”

Zeiders is still proud of his team for winning.

“Each side picked up the other,” Zeiders said.

“The defense picked up the offense. The offense made plays when needed, and the special teams won the game when Quinn Vega hit the game winning field goal.”

Zeiders knows that despite the win, they still need to improve offensively.

“We need to work on throwing the ball,” Zeiders said.

“We’re struggling to complete a lot of passes. When you become one dimensional, it becomes tough. Defensively, we did some nice things. We also put ourselves in some bad situations. We have to figure out how to defend the pass a little better.”

Zeiders is happy with the run game despite starting running back Nadir Mitchell being injured in the Union game.

Point had 132 rushing yards on Saturday, which is five more than their season average at 127 yards per game.

Zeiders knows that his team can’t become complacent when facing a team with a worse record.

“We have to talk about the standard,” Zeiders said.

“It’ll be senior day this weekend. Hopefully, the older guys will want to play their best. It’s their last home game. I hope those guys will provide extra energy to everybody. You only get 11 opportunities to play. Don’t waste one. I felt like we wasted one Saturday. It’s still a work in progress.”

Despite not being fully satisfied with the win, Zeiders was happy to have the chance to show some high school kids what playing at Point is like.

“It was good,” Zeiders said.

“The kids we had show up are interested. They got to see a win. They’ve been able to see competitive football every Saturday they’ve been here. We still need to improve, but those guys can see themselves as part of the program. The more guys you can bring in, the better you’ll be.”

Zeiders mentioned that they hosted several kids from schools like Beauregard and Loachapoka, and they also invited some Valley players.

Point will play their last home game of the season against Kentucky Christian on Saturday.