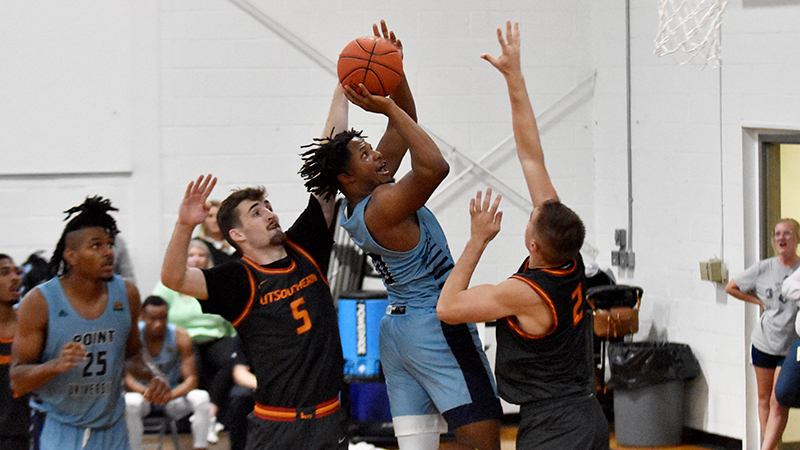 The Point men’s basketball team opened their season with a disappointing 74-70 to Tennessee Southern at home on Thursday night.

Tennessee Southern gained some separation early, and the Skyhawks weren’t able to finish despite closing the gap.

Point went into halftime down 36-27, and Point’s Benjamin Ross was the leading scorer in the first half with nine points.

The Skyhawks overcame a double digit deficit to tie the game up with 10 minutes left.

From then on it was an exchange of possessions that didn’t result in a lot.

It wasn’t until the last minute when Tennessee Southern created some separation, and they made some key free throws to secure the win.

Point head coach Jake Deer knows that his team is young, and they have a lot of work to do.

Ross was the leading scorer for the Skyhawks with 27 points.

Deer was impressed with his showing in their season opener.

“I think he’ll be a really good player for us,” Deer said.

“I think his future is bright.”

RJ Selman was the second leading scorer for the Skyhawks with 18 points.

Deer knows that it’s a long season, and the first game doesn’t mean everything.

“We need to work on rebounding, finishing at the rim and making free throws.”

Point shot 48.2% from the field, and they outrebounded Tennessee Southern 25-22.

The Skyhawks will prepare for their second game of the season at  Mobile on Saturday.