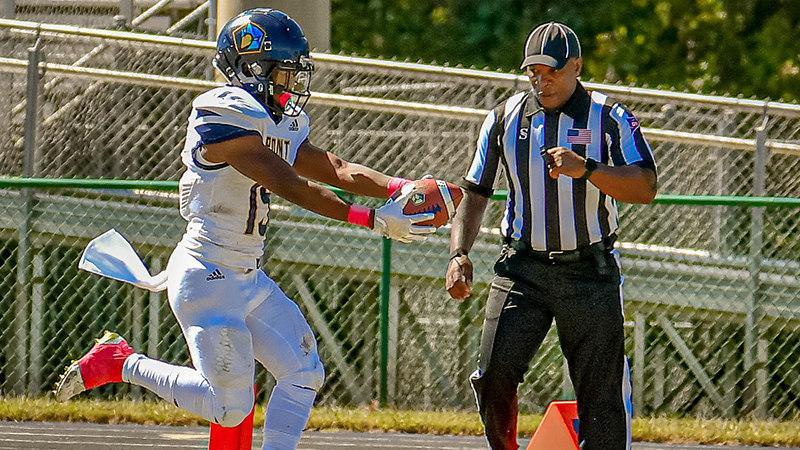 The Point football team earned their first win of the season over St. Andrews on Saturday, but now they’ll have to keep that momentum going into their next game at Bluefield.

The win was the first for head coach Trevor Zeiders, and they did it with their starting quarterback, Brenton White, out for the season.

Mitchell Gossett stepped up in a big way with 14 completions on 18 attempts for 154 yards and two touchdowns.

Gossett also had one run for 19 yards.

The rushing attack also opened up for the Skyhawks as running back Nadir Mitchell had 103 yards and a touchdown on only ten carries.

The Point defense was suffocating as they only allowed a total of 133 yards to the Knights.

Anderson had four tackles, two tackles for a loss and a forced fumble.

The Skyhawks also didn’t have a single punt.

Zeiders was very pleased with his team’s first victory.

“Everything just feels better. There’s more positive energy. It allows the guys to feel excited about themselves and what they accomplished. We got an opportunity to play a lot of guys that wouldn’t have played otherwise.”

Zeiders was also pleased with Gossett’s performance, but he knows there’s still room for growth.

“He did really well considering we were much more efficient,” Zeiders said.

“Two weeks ago, we were 7-of-21 passing. This week we were 14-of-18. We hit one or two, and it turned into bigger plays. We just need to keep moving the chains. He did much better with his execution.”

Zeiders was also happy that they had their best rushing performance of the season.

“We were able to run in both halves,” Zeiders said.

“We’ll have to continue with that moving forward. The offense was able to move the clock and keep the defense off the field. When the defense did see the field, they were rested so they were able to fly around. The special teams put us in situations to be successful.”

Point had a defensive touchdown, and they didn’t let the Knights score until the fourth quarter.

The Skyhawks now have to travel all  the way up to Bluefield, West Virginia to take on a Rams team who have won three straight games.

“We know they’re efficient offensively. Their quarterback was the player of the week in the conference again. That was his second straight game throwing over 300 yards. We’re going to be challenged in the secondary, and that’s where we struggled last year with these guys. Their defense will pressure you.”

Point will also have to deal with some weather issues as the high is expected to be 49 degrees on Saturday.

“It’s more mental than it is anything else,” Zeiders said.

“We’re going to have some guys who aren’t prepared for that. We keep hoping it’ll warm up a little but 50 degree weather is good weather to play football in, but that’ll be a little cool for some of our guys. Once they finally kick off, that will leave their mindset. You can’t recreate that in practice. We’ve talked about it, and it’s all about mental toughness. Hopefully some of the morning practices from the spring will remind them it isn’t terrible.”

Point is 1-5 on the season, and they’ll travel 506 miles to take on the Bluefield Rams at Mitchell Stadium at 2 p.m. EST on Saturday.