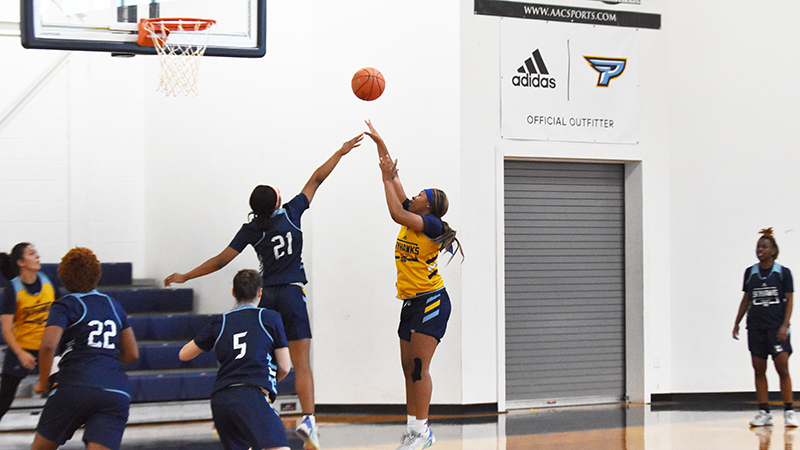 The Point women’s basketball team began practice last month, but now they’ll hit the ground running as they prepare for their first scrimmage on Friday against Southern Union.

The Skyhawks are led by Tory Wooley, who is beginning his tenth season as head coach.

Although the game against Southern Union is only a scrimmage, Wooley is preparing his team the same way he would for any other game.

Wooley feels like his team can be better this year than last year.

“I think we have more size, depth and versatility,” Wooley said.

“We have young ladies that can play multiple positions. We can play more than one way. We can play big or fast. We can put shooters or penetrators out there. I absolutely love what we have.”

Wooley is focusing on improving their offense throughout fall practice.

“We need to be great on both sides of the ball,” Wooley said.

“Offensively, we need to get better with floor spacing. We need to move the ball from one side of the court to the other. We like paint touches. We love shots in rhythm. We have lots of new players. We’re just gelling. We think it’s going to be a great year, and we have great buy-in from all 14 players.”

Wooley used practice on Tuesday to prepare his players for their scrimmage.

“My assistants are doing a great job of watching film on our first two opponents,” Wooley said.

“We’re excited about getting better and competing. The weather is cooling down, so that means it’s one week closer to basketball time.”

Wooley’s players have been working off the court to prepare for the season as well.

“Our players are really applying themselves in the classroom,” Wooley said.

“We had midterms last week. This is the last day of fall break. A lot of them went home to see their loved ones and rejuvenate before we get basketball season going.”

Entering his tenth season, Wooley wants his whole team to grow this year.

“We won our first ten games. This year, we want to have a good year from October until March. Adversity early on is never a bad thing, so we’re going to embrace that this year.”

Wooley wants the Skyhawks to be competitive all year.

“My expectation is to compete for a conference championship by all means necessary,” Wooley said.

“We have five seniors, and I want to send them into the real worls with a degree in one hand and a conference championship in the other.”

Wooley feels like the strength of the Skyhawks is their basketball knowledge.

“They think the game,” Wooley said.

“I think they compete. Their effort is something that is rarely ever questioned. We’re still learning our concepts for the new kids. Learning our system is something we’re getting better at right now. We’re going to have a really good year. Practice has been going well. They’re excited to see some other competition besides themselves. They’ve been seeing themselves for the last five weeks. There’s nothing like competition from another team.”