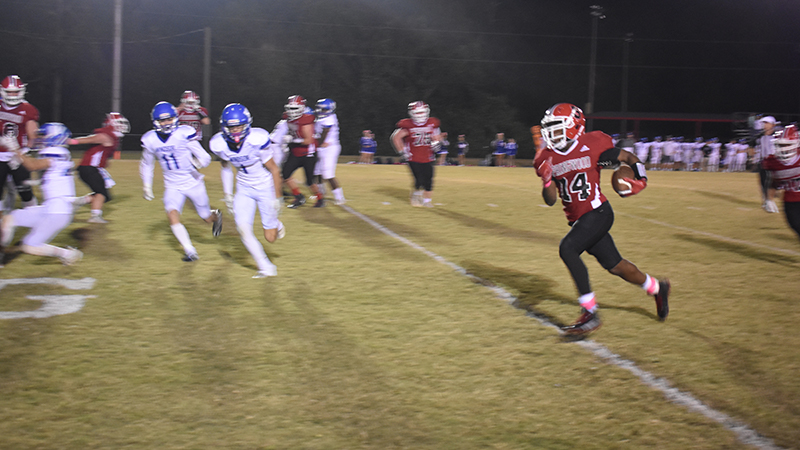 A banged-up Springwood Wildcat team had their toughest challenge to date on Friday. The Windsor Academy Knights from Macon, Georgia came to town and defeated Springwood by a score of 36-12. The Wildcats put up a valiant fight, but they were hard pressed to win against a veteran team that may well win a second straight state championship.

“We are hoping to get back four starters for next week’s game,” said head coach Joey Burch. “I am proud of the way these guys keep fighting back against adversity.”

It was Senior Night at Wildcat Stadium. The senior football players and cheerleaders were joined by family members on the field in a pre-game ceremony.

The visiting Knights took a 6-0 lead on their opening possession. They drove it 67 yards and got the game’s first score on a short run by Jeffrey Denny at the 2:55 mark of the opening quarter.

Springwood tied the game at 6 on the next series.. Cayden Cook was brilliant on the drive. He returned the kickoff to the Windsor 47 to put the Wildcats great field position and had some strong runs on the ensuing drive. Jonathan Johnson also had some terrific runs, gashing the left side of the Knight line. On the first play of the second quarter he followed a crushing block by Anthony Kiefer to run 14 yards for a first-and-goal on the five. That play worked so well they tried it again on the next snap and Johnson made the end zone. With 11:03 left before halftime, the game was tied. The Wildcats had a chance to take the lead on the conversion but a run by quarterback Luke Hudson off the right side of the line came up just short.

The Springwood defense stopped Windsor on their next possession and after a punt the Wildcats took to the field in great field position on the Knight 47, They looked like they were in business after a good run by Johnson but a holding penalty set them back. They wound up kicking it away on fourth and 20 from the Springwood 40.

This time, the Knights would drive it in for a touchdown, getting most of the yardage on running plays between the tackles. Ryland Denny scored on a run off the right side to put the visitors in the lead for good. The point-after failed, but with 6:45 showing in the second quarter Windsor led 12-6.

Another penalty played a big part in killing Springwood’s next drive. A short punt gave the Knights some great field position and they cashed in another score on a long run by Denny off the left side of the line. Windsor made the two-point conversion to extend their lead to 20-6 with 1:33 left in the half.

There was no further scoring before the halftime break, and at intermission a good-sized crowd on hand enjoyed a performance by the Point University marching band. They did a great job.

Denny had a 60-yard scoring run early in the third period to extend the lead. A pass from Brody Ashley to Jeffrey Denny padded the lead to 28-6 with 10:32 left in the third quarter.

The Wildcats fought back to score on the next possession to cut the deficit to 28-12. Following a short kick, Springwood put the ball in play on their 47 and quickly made the end zone. On the third play of the drive, Jonathan Johnson got loose off the left side of the line and outran everyone to the end zone. It was one of his more impressive runs of the year, but unfortunately he tweaked his ankle and was out for the rest of the game.

“We hope to have him back next week,” said Coach Burch. “He’s been having trouble with that ankle for several weeks now.”

With Johnson being sidelined, the Wildcats had a mighty struggle on their hands trying to move the football with one of their best weapons out of the game.

Windsor added one final score on a long run by Denny with 6:25 left in the game. A successful point-after run padded the score to 36-12.

On their final possession, the Wildcats drove the ball inside the Knight 40 before giving it up on an interception near the goal line.  Springwood falls to 4-3.

The Wildcats will be taking on another Georgia team next week. They will be in McDonough with a game versus the New Creation Christian Academy.

Having some starters back from injury should boost their chances in the game.