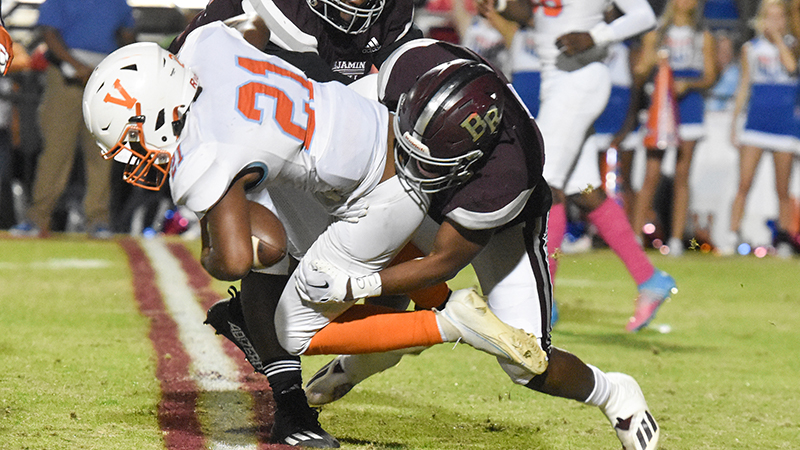 Story and photos by Lizi Arbogast of the Alex City Outlook

For the last several seasons, Benjamin Russell headed into its final football game of the regular season knowing its fate. The Wildcats were trying to find reasons to win — because the playoffs weren’t looming.

This year, they knew their fate heading into Friday night’s non-region game against Valley, but something much different is waiting. A postseason game at Hueytown is next on the docket — the first time a playoff game has been on the schedule since 2018.

And it was a much different way to send off the Benjamin Russell seniors on Senior Night.

“They’ve been through three head coaches, and they haven’t had a winning season before now. Nobody on this team has ever been in the playoffs, so I’m just really proud of them for persevering and sticking it out when they could have given up football because it wasn’t going well.

“To come back and have an 8-2 regular season their senior year, it’s just awesome. I couldn’t be more happy for this group of kids.”

That 8-2 record was sealed with Friday’s 48-7 clobbering of the Valley Rams.

“I’m proud to send the seniors out like this,” Grider said.

“Hopefully we’ll get another home game, but we’re not guaranteed that.”

This potential last home game was certainly one to remember though.

It took Benjamin Russell only two offensive plays to get on the board as Gabe Benton connected with Michael Simmons for a 42-yard touchdown pass just three minutes into the game.

Although Valley quickly tied it up, the real onslaught began in the second quarter, and it was helped along by a fantastic defensive and special teams effort. From the second quarter on, BRHS started five of its seven drives in the Rams’ territory.

“Their punter struggled tonight with a lot of short punts, and we were able to get some good field position from it,” Grider said.

“Our defense was also getting a lot of three and outs.”

That wasn’t the only thing the defense was doing well. Corri Milliner, Bryan Simmons, Ky’Marion Williams, Bradley Pulliam and Jaydon Vickers all recorded sacks, and the Wildcats rakced up five tackles for a loss on top of that.

“They play extremely hard, and we don’t do everything right, but when you play as hard as they play, you make plays even if they’re not necessarily ‘right,’” Grider said. “They’ve really come together late in the season; we’ve played some really good games down the stretch defensively. We’re going to have to continue to play great defense too if we expect to do anything in the playoffs.”

It’s not like the offense was too shabby for Ben Russell on Friday either.

During the second quarter, the Wildcats added touchdowns on back-to-back possessions with Simmons rushing in a 13-yard score and Benton adding another 37-yard touchdown. Milliner had a moment in the sunshine on special teams as well with a 44-yard punt return for a TD.

In the second half, Benton added touchdowns with receptions from Milliner and Simmons again.

Although it was late time and the game was already basically decided, the most highlight-worthy score was a lob from Benton that was surprisingly caught by Chris Foster, who juked and jived his way into the end zone from 29 yards out.

“It was a tough week,” Grider said. “The school was remote on Tuesday and Wednesday because of the flu. We had a lot of cases within the team and a lot of kids couldn’t practice at times during the week. So it was a struggle, but I thought our kids were resilient. We didn’t play our best, but we played well enough to win.”