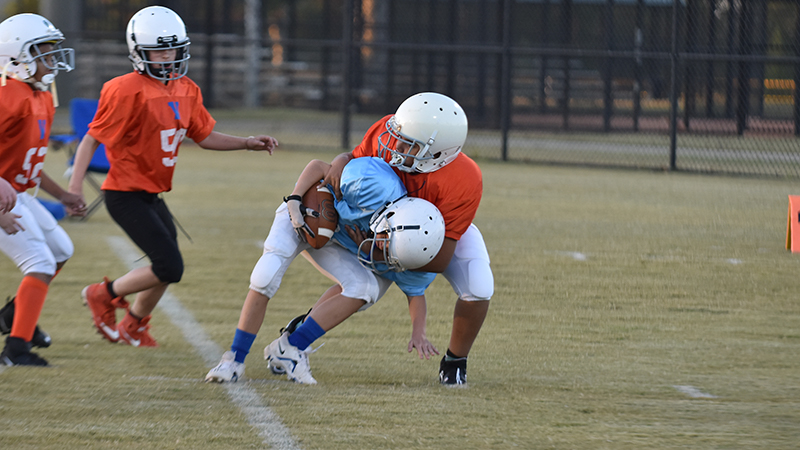 Families from Valley and the surrounding towns gathered together on a cool Monday night to watch their kids learn the game of football.

While Valley youth football has been going on, the teams are now entering their final weeks, and for some parents, it’s been a good experience for their kids.

For the coaches, it’s been a bit of a headache this week as they’re dealing with the flu.

The Valley 12-under teams both had to play nine-on-nine football due to the roster being so thin.

One of the Panthers coaches, Mark Brewer, has enjoyed the season so far, but the flu is affecting his team.

“This is the first game it’s affecting us,” Brewer said.

“I guess everyone will be back next week. We usually have 13 players, but we have some that are out.”

Brewer’s son, Levi, plays on the Panthers, but he hasn’t been affected by the flu.

Besides the shortage of players, Valley Recreation Athletic Manager Mark Hudmon has been pleased with the season so far.

“We have a lot of participation. We’re in our fourth week out of six. We have good crowds. The coaches come in and work with the kids on their of days. We have a real competitive league. Flag football has been fun. There are some things that need fixing, but you can’t satisfy everybody. We do the best we can with it.”

The coaches of these teams are volunteers who are parents to the players.

“The teams are learning,”Hudmon said.

“The coaches and kids are fixing mistakes they had last week. I think it’s beneficial to them.”

Hudmon wants to expand youth football to more age groups, but COVID ended up ruining that.

“We’ve had to mix the ten-year-olds with the eleven-and-twelve-year-olds, but that hasn’t made too much of a difference,” Hudmon said.

“We’d like to expand it, but that all depends on registration. We have to see what’s best for the program.”

The Valley youth football league will play until Halloween, and then the Recreation Department will switch their focus to the winter youth sports.

“We give them six weeks of football,” Hudmon said.

“We had 152 kids register for football. That’s a lot. We also have an instructional soccer program. We have some ex-soccer players who are teaching fundamentals. We’re about to start basketball registration on the 17th of October. That’ll run through the 15th of November. We’ll have tryouts, and then we’ll split up our teams and practice and December.”