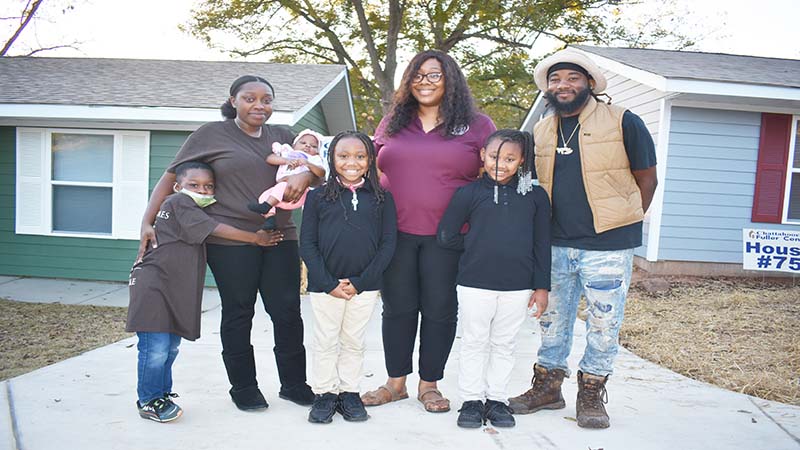 LANETT — The Chattahoochee Fuller Center Project (CFCP) reached a new milestone on Monday with the dedications of Homes No. 74 and 75. Two new homes on North 12th Avenue in Lanett have been completed, and two families have moved in them.

Each new home is approximately 1,175 square feet in size and each has three bedrooms, two baths, a living room, kitchen and laundry room. As a bonus, there are some large pecan trees in the backyard.

In popular culture, No. 75 is a number denoting a diamond jubilee. For the CFCP to have reached that kind of milestone in just 15 years of home building is quite an achievement, and the organization has no plans of slowing down. The CFCP is looking at building two senior homes in the local area and possibly three new homes.

In a 5 p.m. dedication ceremony, CFCP President Curt Johnson said that reaching 75 homes is a landmark occasion but what makes it really special is that the two new homes honor Deputy J’Mar Abel, who lost his life this past June in a police chase in northern Chambers County. He became the first Chambers County Sheriff’s Office deputy to have lost his life in the line of duty.

“This build was special for several reasons,” Johnson said. “It’s in the same neighborhood where our first Millard Fuller Legacy Build took place in 2009. There are 16 new homes in this neighborhood today. As long as these two homes are standing, they will honor the memory of Deputy J’Mar Abel.”

Sheriff Sid Lockhart thanked the CFCP for doing this in Deputy Abel’s memory. “It is so heartwarming to see this done in his memory,” he said. “We are so pleased to have his fiance, Jasmine, and her two children here today.”

Jasmine tried hard to hold back the tears as she thanked everyone for what they had done. She was wearing a silver chain with a likeness of a small deputy’s badge on it. With her were five-year-old son Bryson and infant daughter Gianna Abel.

“J’Mar’s name will always be associated with these two houses,” CFCP Executive Director Kim Roberts said. “It was an honor for us to do this. We love you and your children, Jasmine. You will always be welcome here.”

Mayor Jamie Heard presented the house keys to the new homeowners. He noted that both homeowners have strong connections to the city. Alexandria works at city hall and Terrence with the CFCP.

“We want to thank the mayor for always standing beside us,” Roberts said. “He has supported us in everything we have tried to do.”

Heard, in turn, thanked the CFCP. “We want you to keep building in Lanett,” he said.

“We are going to keep building in our Chattahoochee Valley area,” Roberts replied.

She thanked the mayor and council on having been great hosts for the city’s annual fall festival in late October. “Robin (Pierre) and I had a great time giving away Halloween costumes,” she said.

Mayor Heard told the assembled crowd that Roberts will have the honor of lighting Lanett’s Christmas tree at the annual lighting ceremony in Veterans Park on Monday, Dec. 5.