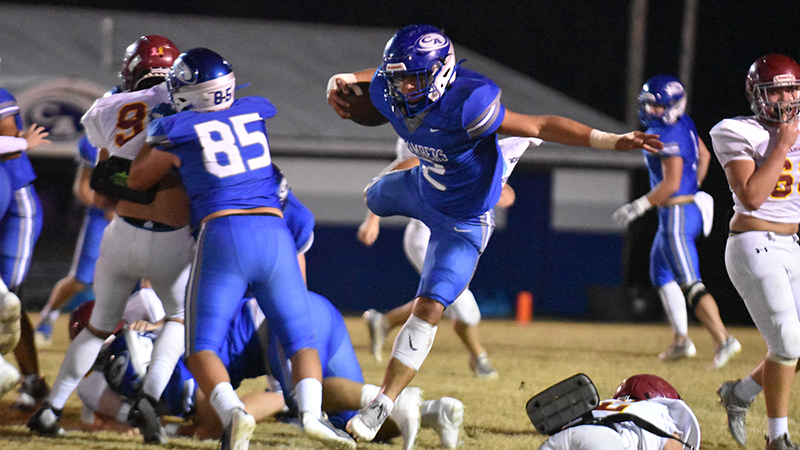 Escambia Academy walked onto Torbert-Allen Field thinking they could make it two straight over the Rebels on Friday night.

Chambers Academy was having none of that as their rushing attack wore down Escambia’s defense to win 56-12 in a revenge game that sends the Rebels to the semifinals of the AISA  2A playoffs.

Chambers Academy shot out of a cannon to start the game.

It took two plays for Rebel running back Braxton Yerta to find the end zone, and the Rebels were up 6-0 only 40 seconds into the game.

The Rebel defense tried to one up the offense by holding Escambia to a three-and-out followed by a blocked punt.

After starting the drive on Escambia’s 19 yard line, Rebel running back Buster Coker cut through the Cougar defense to make it 14-0 with 7:36 left in the first quarter after succeeding on the two-point conversion.

Escambia had a good kickoff return that started their drive on their own 44 yard line, but a Coker sack on third down quickly shut down the drive.

After the punt, Chambers Academy was forced to start its drive at its own 12 yard line.

The Rebels mounted a six minute drive that ended in a Jacob Norgard touchdown to make it 21-0 with a minute left in the first quarter.

The second quarter started with an Escambia punt, and the Rebels were forced to start on their own 29 yard line.

Field position was no issue for the Rebels as Braxton Yerta broke free for a 71 yard touchdown run 30 seconds into the second quarter on the first play of the drive.

After another nice kickoff return by Escambia, the Cougars set up on their own 45 yard line.

The Cougars attempted a deep pass, but defensive back Kyle Hand picked it off and ran it back 70 yards to the house to make it 35-0 with nine minutes left in the second quarter.

The Rebels forced another punt, but they had to start another long drive.

Escambia’s defense continued to struggle as Tyson Hewett gave the Rebels their fourth rushing touchdown of the night to make it 42-0 with six minutes left in the half.

The Cougars started the next drive on their own 42 yard line, but a fumble ruined any hope of them scoring.

With only two minutes left in the drive, the Rebels had no issue running the ball as Eli Wharton gave Chambers Academy its fifth rushing touchdown of the night to make it 49-0 heading into halftime.

The Rebels took out their starters in the second half, and the rest of the game was played with a running clock.

Escambia did avoid the shutout as they fought for a rushing touchdown four minutes into the second half to make it 49-6.

Chambers Academy added one more touchdown thanks to Eli Wharton taking it in for his second touchdown of the night to make it 56-6 with 11 minutes left.

Escambia had one more garbage time touchdown pass as time expired, and the Rebels celebrated their revenge win over the Cougars.

“If you play a revenge game, you don’t play as well. It just feels good to win the first round at home and move on to the second round at home. We’re one step closer to a state championship. I’m excited about the way our kids rebounded.”

The Rebels were without one of their weapons, Luke Tarver, but they still found a way to score six touchdowns on the ground among four players.

“We have a lot of guys who can carry the ball, and our guys up front are the key,” Allen said.

“They’re doing a great job, and they’re buying into the system.”

Allen was also pleased with his defense, who held Escambia scoreless in the first half.

“We’ve played well defensively most of the year, and I feel like we did a good job tonight. They’re an explosive team with a lot of speed.”

Allen was also pleased with how his team was able to sustain drives.

“We didn’t turn it over, but we had some penalties we have to clean up,” Allen said.

“We played mistake free football for the most part.”

The Rebels will return home next week to face an unfamiliar foe in Clarke Prep in the AISA semifinals.