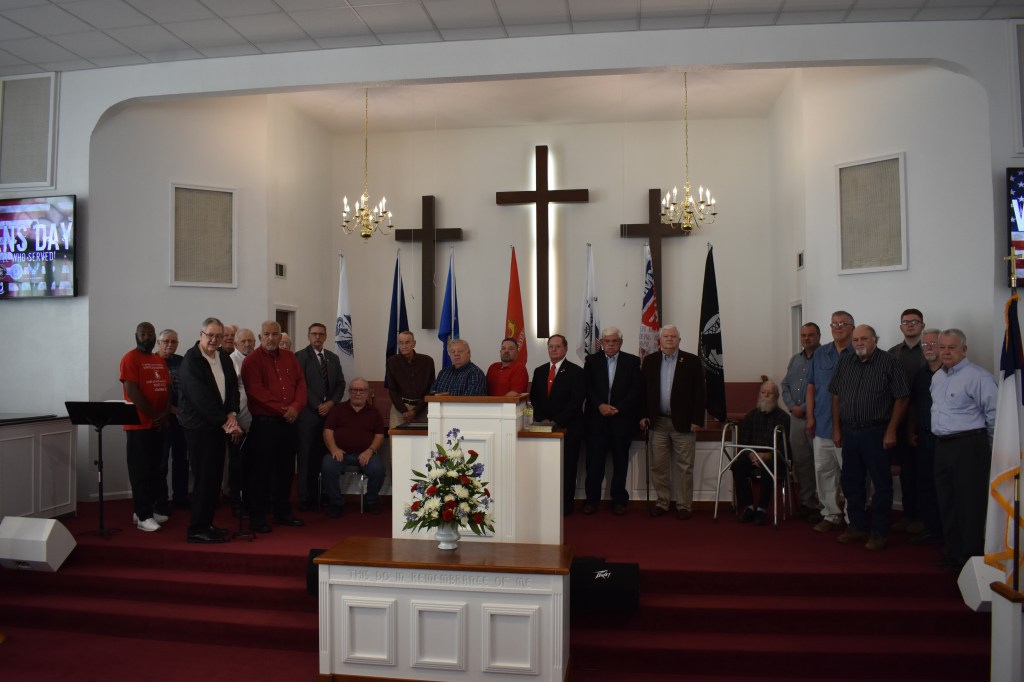 The guest speaker for the day, Phillip Crittenden of Birmingham, talked about the time he was wounded in that war.

Crittenden entered the Army in 1966 and was trained as an MP at Fort Benning. He was a sergeant with the 127th MP Company in South Vietnam when the Tet Offensive began in the winter of 1968. Prior to that, most of the fighting had been with the Viet Cong in isolated jungle areas. With Tet, the North Vietnamese Army took the fighting to the cities. In the opening hours of the offensive, Crittenden was on MP duty in one of the country’s larger cities. The 127th was a support unit for the First Cavalry Division. The battle began at approximately 10 p.m.

“They drew us out of town, so they could attack the cities,” he said. “When we knew the city was being attacked, we went back there. As we were approaching a South Vietnamese infantry station, we saw it explode. We helped as many of them as we could, and I quickly learned how unnerving it is when someone who’s only about 15 feet away is firing at you with an AK-47. It’s not a good place to be.”

Crittenden said that many people had asked him over the years if he was scared to be facing that.

“You don’t have time to be scared.” he said. “You react with the training the Army has given you. Such situations are a good lesson for a Christian. You had better be ready when the enemy comes at you or you won’t survive.”

Crittenden was in a kneeling position while reloading his rifle when hit by gunfire. In all the chaos that was going on, he didn’t know he had been hit until he felt that his pants leg was wet.

“I knew I was bleeding from right behind my knee,” he said. “I remember putting in my finger to find the bullet. It was hot and burned the tip of my finger. That hurt more than the bullet wound.”

“It was the end of the war for me,” he said. “I went to a hospital, then to a convalescent center and then back home.”

The Tet Offensive was a series of coordinated North Vietnamese attacks on more than 100 cities and outposts in South Vietnam. The offensive was an attempt to foment rebellion among the people of South Vietnam against their government and to encourage the U.S. to scale back its involvement in the war. “Tet” is the Lunar New Year and is celebrated by many Asian peoples. Although the Tet Offensive was a decisive military defeat for the North Vietnamese, it was a huge propaganda victory for them. Many historians credit it as a turning point in the war for them. It played an important role in weakening U.S. public support for the war in Vietnam.

When Crittenden got back home, he learned of the heartbreak and worry his mother had gone through with his being wounded in action.

On the day it took place, she had a premonition that something bad was going to happen. She feared the worst when she was informed of him being wounded. A devout Christian, she sought strength in reading Psalm 91, which conveys themes of God’s protection and rescue from danger. She showed him that passage in the Bible when they were reunited.

“I could still see the tear stains on the page,” he said.

“I didn’t get saved until 1973,” he said. “If I had died in Vietnam, I would have been eternally separated from the Lord. Because of my mother’s prayers, I survived long enough to get back home alive.”

Crittenden admits to having a wild and rebellious period before being brought to God.

“I was 27 years old and had done something stupid,” he said. “I’m 77 now. That was 50 years ago. The only person I could call was my mother. It a one of the hardest calls I have ever had to make. She came and got me out of the Jefferson County Jail.”

She gave him a stern lecture as good mothers are inclined to do.

The mother introduced him to one of her friends who sat him down and talked to him about where he was heading in life.

“He told me I had to stay away from that if I was ever going to walk in a the light,” Crittenden said.

“All of my problems weren’t solved, but I had found the best friend anyone could ever have, Jesus Christ,” he said. “With Jesus, I have a friend who will walk with me and share my problems. I learned the hard way that God will never give up on anyone. I encourage you to do the same.”

Crittenden said that he places his faith in a book that was written 1,600 years ago by 60 contributing writers, the Holy Bible.

“Its main lesson is that Jesus is coming again,” he said. “I am in a state of transition from this life to a new one I will have one day.”

Crittenden said he learned a lot about optimism from a man named Walt he worked with in Virginia at one point in his life.

“No matter what the weather was like outside, every day when he came to work he would say, ‘It’s a beautiful day in Virginia!’ It could be irritating at times, but I think he had the right idea.”

He now likes to say, “It’s a beautiful day in Alabama!”

Crittenden said he learned an important lesson about life while in San Francisco. He was there visiting a family member and had the opportunity to do something he’s always wanted to do – take a picture of the Golden Gate Bridge. When he was near the bridge, a fog was rolling in obscuring the massive structure at ground level, Instead of giving up on the idea, he climbed a nearby high hill. As he was gaining elevation, the fog went away, revealing a spectacular view of one of America’s cherished landmarks.

As he was speaking, that photo was displayed on the big screen TVs in the sanctuary. It drew some appreciative oohs and ahhs from the assemblage.

“I’m hooked on saying it’s a beautiful day in Alabama,” he said. “When I go to Home Depot, the people who work there recognize me and say it before I can, I’ve said it to them so much, but that’s alright. I want all of you to believe with me that God is faithful. He will be with us on good days and bad. It is a beautiful day in Alabama, and God will always guide you through the days he has given you.”

The Sunday morning program began with flags from each branch of military service being brought in for display throughout the service. Doug White brought in the Army flag as “The Caissons Go Rolling Along” was being played, Todd Nolin the Navy flag as “Anchors Aweigh” was played, Wayne Belcher the Air Force flag to the tune off “Off We Go Into the Wild Blue Yonder,” and Keiron Hood the Marine flag as the “Marine Corps Hymn” was being played. Tommy Smith brought in the Air Force Flag and Tim Procise the POW/MIA flag.

Chuck Cain then called for members of each branch of service to come forward for recognition. More than 20 men answered that call. They had each served in the Army, Navy, Air Force or Marines.

Mayor Leonard Riley of Valley thanked the veterans for their service, and Mayor Steve Tramell of West Point presented a proclamation in appreciation of the church hosting Veterans and Military Appreciation Day.