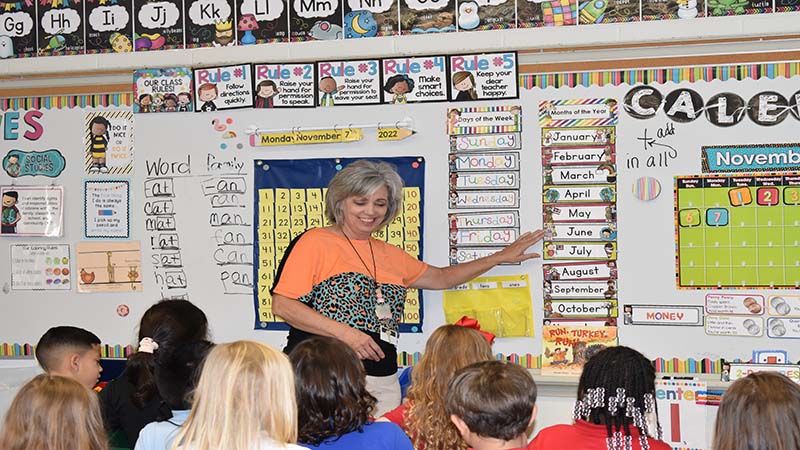 In her fourth year of teaching, Kindergarten Teacher Jone Clifton has won the Teacher of the Year award at Bob Harding Shawmut Elementary School for the second time.

“I was honored to be representing BHS,” Clifton said. “It is a great honor to represent us as a school because every teacher in this building works so hard with their students. To be nominated for that, it was an awesome feeling.”

Clifton began her teaching career later in life. In her first career, she worked in the medical field but she never felt fully satisfied. She felt that God was directing her down a different path.

“Something still just wasn’t there,” Clifton said. “My calling wasn’t in the medical field. And then I kept leaning back toward getting my degree in teaching. That was where God was leading me to because this is where I feel like I belong.”

Finally, she decided to follow her heart and go back to school. She started working as a kindergarten teacher four years ago.

Clifton’s passion comes from seeing the look of understanding on her students’ faces when they finally comprehend a concept. Though she said her principal has offered for her to move to a different grade level, Clifton wants to stay in this grade for as long as she can.

“I was offered to go to another grade, but as long as they let me stay in kindergarten, I will,” Clifton said. “I can’t explain it when they just start shining and start getting it.”

In kindergarten, the children come to school with very different levels of knowledge, according to Clifton. She sets her expectations high, meeting the children where they are and helping them get to where they need to be for subsequent grades.

“Every one of my students can learn,” Clifton said. “They may not learn on the same level as everybody else but every one of them is capable of learning. I do not let them say, ‘I cannot.’ ‘Yes, you can. We will meet you where you are.’”

It is important, Clifton said, that every student is given the confidence to be able to learn. She makes sure that no child in her classroom has doubts, even if a student is at a different level than the rest.

“They are like little sponges,” Clifton said. “It’s that aha moment when you see that they’ve struggled so hard, and then that light bulb comes on. When I see that look, I know I’m a part of that. I had something to do with that.”

One piece of advice that Clifton has for those interested in becoming a teacher is that nothing you learn in schooling can prepare you for classroom management. She also suggested that future teachers job shadow or work as a ParaPro so that they can discover if it is their passion.

“No amount of schooling will ever teach you classroom management,” Clifton said. “Nothing can prepare you for what you have to do in the classroom to manage it.”

Though the classroom has taught Clifton a lot in the last four years, the collaboration between fellow teachers is what she finds most helpful. Clifton praised the team effort that she believes the school is built on.

“It takes all of us working together,” Clifton said. “To me, teaching is not an ‘I’ thing. It’s a ‘we’ thing. There’s always something you can learn from another teacher.”

Clifton hopes that the students in her class will develop a love of learning to last them through their education. Above all else, Clifton wants to see her students thriving and happy.

“I wish they would all have joy and happiness in their lives,” Clifton said. “At the end of the day, that’s what I want from them. I’m very passionate about them.”

Winning the Teacher of the Year award has reinvigorated Clifton’s passion in her work with her students.

“It’s going to make me want to strive that much harder to get my kids where they need to be and to reach them and meet them where they’re at and get them to go beyond,” Clifton said. “That makes me want to work harder.”