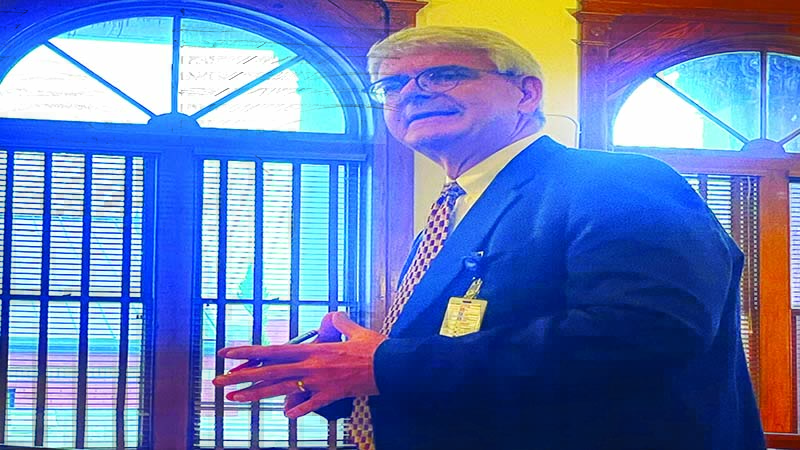 VALLEY — With a staff of over 450 people, EAMC-Lanier Hospital is one of the largest employers in Chambers County. This creates an annual payroll of more than $18 million, money that turns over in the local community. Having a hospital in Chambers County is of huge importance.

According to EAMC-Lanier Administrator Greg Nichols, the hospital would have suffered the same fate as many rural hospitals during the last ten years had not Chambers County voters approved a four-mill tax to help keep it open.

“It would have been closed by now had it not been for this tax,” Nichols said at a Monday night meeting of the Valley Lions Club.

The tax was approved in a countywide vote ten years ago. It’s up for renewal in next Tuesday’s midterm election. It’s a simple yes-no option on the back of the ballot.

That vote of confidence on the part of county voters was a big factor with officials from the East Alabama Medical Center choosing to have an affiliation with Lanier Memorial.

It is an arrangement that has helped both hospitals. There are two Chambers County residents on the EAMC board of directors.

Nichols said he is proud to call Chambers County home. “My wife and I raised six kids here,” he said. “I believe Chambers County residents care for their neighbors and those who are in need. It’s important to understand what this tax does.”

“We are now seeing between 60 and 70 emergency room patients every day,” Nichols said. “Almost all of them are flu related. Over the past year and half, three babies have been delivered in the emergency room. We treat many people who have had heart attacks or strokes, and we treat many people who have been injured in accidents. In many situations, we stabilize patients before sending them to larger hospitals.”

“Our goal is to break even every year, and the four-mill tax helps us do that,” Nichols said.

The tax money received goes directly into needed improvements. Over $2 million a year goes into that.

Over the past 10 years, some $21.5 million in capital improvements have gone into needed additions such as an acute rehab unit, an ambulatory surgery center and a geriatric psych unit. Over the past ten years, EAMC-Lanier has been able to acquire a new MRI machine and a 3D mammography machine.

An MRI is an essential piece of equipment for any hospital, and the 3D mammography machine is ideal for women who don’t need to be burdened by traveling out of town.

Over $5 million was spent on the geriatric psych unit. It has been in service now for about four weeks. State officials have raved about what a great facility it is. Many patients have found the view from the third-floor window most relaxing. It’s one of the best views anywhere of the Chattahoochee River.

The Lanier Nursing Home is undergoing a complete renovation. It’s a $3 million program and is being done 10 rooms at a time. This helps avoid disruptions for the residents. It should take approximately two years to complete the renovation.

“This tax helps us do a lot of things,” Nichols said.

“We have primary care physicians that might not be here without a local hospital,” Nichols said. “The medical pavilion is a huge asset because we have those physicians there.”

Having a hospital with an emergency room, an ambulatory surgery center, acute rehab unit and geriatric psych unit and a nearby medical pavilion is an enormous asset in attracting new business and industry to the community. “Businesses are looking for this when they are searching for sites to expand,” Nichols said. “We are asking people to vote yes on the continuation of this tax. This tax has generated over $10 million over the last 10 years. It has helped us spend over $20 million improvements.”

An affiliation with EAMC in Opelika has been a huge boost to the local hospital. Before the affiliation, Lanier Memorial struggled in large measure to an unfavorable reimbursement rate. It was reaching a critical stage when the affiliation took place.

“It’s much better now,” Nichols said. “The tax being approved showed that the community is behind having a local hospital. That was a big factor in the merger that took place. Local support has been tremendous in sustaining this hospital over the years.”

More than 25 rural counties in Alabama do not have a hospital.  That’s more than one-third of the state’s counties.

Nichols thanked Lions Club members for giving him the opportunity to speak. He said he appreciated Lions International’s long-time commitment to sight preservation. It began in 1925 when Helen Keller encouraged them to be “knights for the blind’ at the organization’s international convention.

Nichols said he has a new-found appreciation for sight preservation following an injury he sustained while cutting grass at his home. He was nearly blind in one eye due to a detached retina.

Due to the quality of today’s eye surgery, he was restored to 20-20 vision.