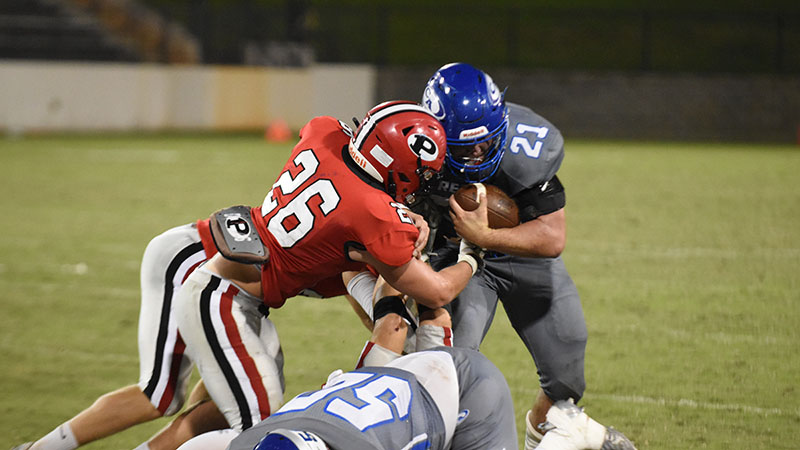 Chambers Academy linebacker Gavin Kight had his senior season cut short by a torn ACL, but it opened up a new path for his future.

Kight has been a lifer at Chambers Academy, and he started playing peewee football in third grade.

He joined the varsity squad in eighth grade, and he got to experience two state championships.

“In my junior year, I got more of a role as a leader on defense,” Kight said.

“Senior season rolled around, and I tore my ACL in the second game. Winning two state championships and having the same coach watch me grow up, I’d say I had a good career.”

Kight’s favorite memory while being a Rebel was winning the state championship in his sophomore year.

“I didn’t know how to feel about it when we won in my eighth grade year,” Kight said.

“It was really cool, but it wasn’t like it was for the seniors. It’s a different type of feeling when you work for it and help the team. If someone asked me what one of my favorite experiences was, it would be that 2020 championship.”

The Rebels are back in the playoffs, but Kight will have to watch from the sidelines as they compete for another state championship.

“I felt like it was my turn to show out and have a good year. I didn’t care about scholarships or offers. I just wanted to win a state championship. It was heartbreaking. I didn’t sleep much at night because I couldn’t get over what was happening. I hate it, but I still love seeing the team win. It was a pride check. Luke [Tarver] stepped up when I got hurt. Watching the team turn the season around has been fun to watch.”

Kight’s other favorite memory from playing at Chambers was summer workouts.

“I liked coming in after work and going to work with a bunch of guys that everyone doubted,” Kight said.

“Seeing everybody come in with a want to win has been a good memory for me.”

Kight adopted the nickname “Captain America” during his time at Chambers Academy.

“We were playing Springwood, and I had an American flag bandana. I found it and thought I’d wear it. After I hit a guy on the sideline, coach [Allen] just said,’ Atta boy captain,’ and it just kind of stuck.”

Kight’s football career will end this season, and he’s going to miss the atmosphere at Chambers Academy.

“We’re a smaller school. I’ll miss Watching the little kids give you high fives or seeing them with your number on your face. It’s just a big family. People watch you grow up, and you talk to these guys you’ve been teammates with. It’s not like the big schools. You experience more of what football is all about. After I got hurt, all the texts and calls I got helped me a lot. It’s been a blessing playing here.”

Kight plans to attend Southern Union State Community College where he will train as a welder.

“I kind of just gave up the whole football thing,” Kight said.

“I’m going to go into welding and start that path in life. I like manual labor stuff, and the money is good. It’s like an art. It’s not something where you just kind of do it and you’re onto the next thing. I’ve always had the satisfaction of looking at your work and being proud of that.”